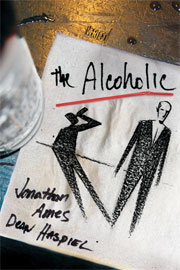 The answer to the age-old do I like him or do I lump him Jonathan Ames riddle is this: He is at his best when he is collaborating with someone else. Done. Signed. Sealed. Sent.

Now I just have to take a stand on Chelsea Handler, and my life will make a lot more sense.

Ames’ graphic novel-ish The Alcoholic is a words-by-Ames, visuals-by-Dean Haspiel story of a rapidly balding man named Jonathan A. and how he got to this moment: Emerging from a black-out drunk, in the backseat of a dirty car with a very old woman (and her cats) who wants to make sweet, sweet love with him. When policemen bust in on the scene, Jonathan A. takes off on a mad sprint through Asbury Park and ends up hiding out, buried in sand, beneath a boardwalk. Then comes the introspection.

He starts with his first pulls off the bottle as a high school student who spends weekends getting wrecked with his best friend Sal, all while deceiving his parents by getting good grades, getting into Yale, playing sports. Relations with Sal go south (Ha!) when they engage in some drunken bumbly fumbly one night and then vow to never speak of it again. “It’ll be better with girls,” Sal tells him.

Then Sal starts running with a new crowd and Jonathan mourns the loss. He graduates, his parents die together in a car accident, he lands in New York where he navigates the drinking life, the writing life, a misadventure as a writer in residence at a school with at least five randy coeds who want to tag-team him and, mostly, a relationship with a much younger woman that is first exhilarating and then IBS causing. This break up finds him staring at his telephone, leaving unanswered messages on her machine, weeping into his vodka, and boring his aunt — his only living relative and own personal wise old sage — with his tales of romantic torture. She eventually jolts him awake with the words “No one gets everything they want. That’s the way it is.”

He wakes up hung over on the morning of September 11, and here the story deviates into something new, both helping a widowed neighbor and simultaneously worrying about what will happen when he tries to donate his Cocaine-flavored blood. This part of the story is a strange digression that feels inset and doesn’t really jibe with the rest of the story so well. It also includes cameos from Monica Lewinsky and Bill Clinton — not at the same time.

In all of the ways Jonathan Ames has chosen to tell his life story — and there have been plenty including columns for alternative publications, essays, novels loosely based on his life and even his television show “Bored to Death” which is peppered with instances of autobiography.

Haspiel has plenty to do with this effectiveness of this graphic novel, sometimes humor-fused drama of addiction and loss and self-destruction. It’s black and white with purposeful shading that gives the book a real dark-side, rock bottom feel, with a touch of noir — specifically when it comes to the ladies. He’s also unflinching in the face of sexual positions, episodes of irritable bowel syndrome, and depicting the sort or morning after that includes a cab driver who sidelines as a drug dealer and Jonathan A.’s head lodged into a garbage can.

When he flies solo, Ames has a tendency to fall into the edgy pre-teen habit of hiding his writing talent behind shock jock-ery in a way that doesn’t seem as real as this, which is probably as close to his real life as anything else he does. The moments are still there: The Coke, the six-some, the soul-sucking moments of getting fired while wearing just a single shoe. But it’s tempered here and genuine. Hard to tell if it is maturity or making psychological space for Haspiel’s illustrations that makes this the most palatable thing he has done.