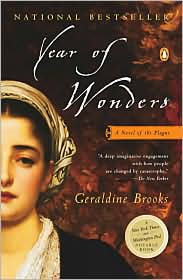 In the 17th century the Plague ravaged Europe, killing millions of people. It was spread by infested rats and their fleas. Unsanitary conditions and the overpopulation of large cities such as London enabled the disease to spread rapidly. When people tried to outrun the Plague and leave the cities behind they unknowingly carried the disease with them, infecting the poorer populations in the countryside. Entire families died and the economy suffered tremendously due to the loss of able-bodied workers. Life was bleak.

Anyone with a 12th grade education knows the basics about the Plague that I wrote in that paragraph. Sometimes facts can make something so impersonal that we forget that real people lived during those times. People with families, ambitions, fears, and a desire to live.

In A Year of Wonders, Geraldine Brooks gives voice to the plight of a village overcome by the Plague. When the Plague strikes a little mountain village in England, the villagers decide to isolate themselves so not to spread the disease. They look at the isolation as a way to directly confront the trial that God has brought to their doorstep. The villagers are simple folks that make a living through mining, herding, and farming and they face the Plague with faith and determination.

Anna Frith is a young widow in the center of this story. After losing her family to the disease, she buries herself in the daily tasks of keeping food on the table and helping to comfort and nurse those that are sick and dying. At her side is Elinor, the Rector’s young and beautiful wife who becomes Anna's dearest friend during the isolation. Together they nurse the sick, deliver new life, and aid in giving comfort when they can, as best they can.

The story itself is simple. Reading it is like watching a horror movie when you know the knife-wielding maniac is behind the shower curtain but there is nothing you can do it stop the pretty camp counselor from pulling it back. When the bolt of flea-infested cloth arrives from London, you know what is going to happen and you cringe yet are helpless to do anything except turn the page and hope for the best.

What makes this book a profound and brilliant novel is being able to tear back the layers of time and to look at moment of history from the perspective of the people that lived it, not just the facts we find in text books. You see human despair, pain, and suffering. But, we also see joy and new life spring up from the ashes. The author gives us a look into the best and worst of human nature during this time and even in the darkest of moments, there is still hope.

I loved the story and found myself both weeping and laughing throughout the book. It is a brilliant novel with a compelling story that makes you question what you would do in that situation. The story flows effortlessly and there are a few unexpected events that add even more to it. The character development was not as deep as it might have been; however, it fit. Although religion wasn't the primary focus of the book, it was subtly addressed in various ways but not as a question about their beliefs but as how those beliefs manifested into action.

The Epilogue had good intentions but ultimately fell short for me. Brooks hints throughout the novel about Anna leaving the town and doing better for herself in some capacity. How Brooks decides to do that was awkward and it soured the rest of the story for me a little bit.

I think almost any historical fiction reader would love this short, sweet novel. You'll fall in love with its enduring characters and raw humanity. There is a tone to it that reminded me of The Handmaid's Tale, but what lingered with me is the knowledge that this isn't a work of pure fiction but rather a talented author giving voice to a tragic, dark, and desperate moment in human history.