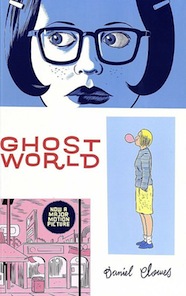 I just stopped hating Daniel Clowes’ graphic novel Ghost World like 7 minutes ago. Literally. I’ve had a long history of hating the listless bitches Enid and Rebecca and their ironic diner hopping, misfit hounding, and personality contriving. But it just went away. Like a decade-old hate fever that finally broke.

Fact: My boyfriend and I rarely fight. So rarely that I can remember that we did have a fight in 2007 while watching the movie “Ghost World” about how much I hate the movie “Ghost World.” It was a lot of me ranting, not unlike Enid, and him confused at my outburst.
Other fact: I was drunk.

I got about a quarter of the way into Ghost World about two weeks ago, sighing and eye rolling all while getting really stoked about finally reading something I hate. I could really get in there and hate it super hard all over the internet. It’s been far too long. I’ve been cursed by a steady stream of three-star or better book picks. Blerg. Boring.

I set Ghost World aside for whatever reason and when I picked it up again I started at the beginning. And … nothing. No throbbing forehead veins. My blood didn’t simmer. No eye rolling. I thought about Enid, her ever-changing hair and style statements, following people she believes are satanists around the grocery store to see what satanists eat and having a snarky comment and mean-spirited nickname about every person who falls into her field of vision.

Nothing. In fact, I laughed.

The story is mini chapters in the life of best friends Enid and Rebecca. They’re droll and bored and boring and they sprawl on beds and talk and bitch about models in magazines and they go to diners and make up stories about the other regulars. Sometimes they wander around and do stuff. But mostly they’re in this limbo between high school and college and so close they wonder if its healthy. They abuse the pushover guy friend. They dream of walking into a sex shop and looking around. At one point Enid really gets into the cartoonist Daniel Clowes. (Okay, that’s still annoying).

Don’t get me wrong. Enid and Rebecca are still unlikable little snots I’m glad I didn’t sit next to in homeroom. But there are some truly great scenes. Enid tries to muster some romantic nighttime feelings for a teacher, testing and ditching out on different scenarios in her head when she’s in bed — including one that finds him fully clothed in the shower with her — before finally falling asleep without consummating the sexy visual. Or, during a conversation about a guy Enid and Rebecca know who is totally into politics, Enid apes a conversation with him:

“Yeah Jason, ever since you stopped eating meat and bathing and started doing grafitti and fucking up ATM machines, the world has become a way better place.”

So I stand corrected. Ghost World isn’t terrible. It certainly isn’t anything to fight about.