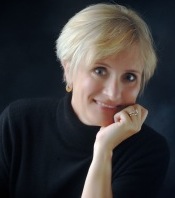 Reading the about pages on Terri Peterson Smith’s portfolio or her fabulous blog, Bookclub Traveler can be a little intimidating. There’s awards, magazines, nonprofit organizations, corporations, and just about every other kind of writing imaginable. It’s impressive! And then there’s this line, which is my favorite: “I have written about an incredible array of subjects and people, from dismantling bombs in the former Soviet Union and making electricity from microbes, to Broadway shows, mice, and potential cures for cancer.”

It’s an honor to have her as an MN Reads reviewer and you can look forward to her reviews soon. In the meantime you can get to know a bit more about her by reading her answers to the 6 questions we always ask.

What book(s) are you currently reading?
Finishing The Emperor’s Children by Claire Messud and starting David McCullough’s The Greater Journey: Americans in Paris. I saw McCullough at an event last week in Wayzata. He’s both a great writer and a great thinker.

Have you ever had a crush on a fictional character? Who?
Edward Rochester in Jane Eyre. A guy who is wealthy, passionate, and has some sort of dark secret. . . you can’t beat that. Later, I read Wide Sargasso Sea, which tells the story from the viewpoint of Mrs. Rochester, the wife he has locked in the attic. He doesn’t come off so well.

If your favorite author came to Minnesota, who would it be and what bar would you take him/her to?
I’m picking my date based on who would be the most fun to go to a bar with so I’d have to choose F. Scott Fitzgerald. We’d go to some of his old St. Paul haunts, dinner outside at W.A. Frost, then maybe a party out on Lake Minnetonka with everyone wearing white. Or, I might choose Ernest Hemingway. We’d go fishing somewhere near Ely, hit some local bars, maybe get into some fights.

What was your first favorite book?
McElligot’s Pool by Dr. Seuss. I loved Marco’s imagination regarding what kinds of fish he might catch in McGelligot’s pool, despite the fact that an adult kept telling him he’d never catch anything. For example, “Some Circus Fish! Fish from an acrobat school, might stage a big show in McElligot’s Pool!” The pictures are the best part. I still love that book and I quoted it in a magazine article I wrote about genetically modified fish.

Let’s say Fahrenheit 451 comes to life, which book would you become in order to save it from annihilation?
I don’t think I can choose just one, but my priority would be books for children or young readers because that’s where an interest in reading and writing starts. So, I’d probably choose the Little House on the Prairie books or perhaps the Harry Potter series.

What is one book you haven’t read but want to read before you die?
Don Quixote. I have a copy. I have friends who want to read it, too, and discuss it. But, it’s like going to the gym; I just need to do it.