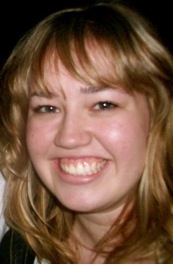 Here’s a bit about Kelly, our newest reviewer in her own words: I'm about to graduate with my Bachelor of Arts in English Literature and I love books and Minnesota. Throughout my undergraduate career I have changed my major at least ten times but after five years of college, I love my major. I spend a lot of my free time reading (mostly) non-fiction books, drinking too much coffee, watching bad reality television, and making pro/con lists. I have written for numerous newspapers where I had a love/hate relationship with deadlines and people. I have lived in Minnesota for my entire life and I think its a pretty great place, I mean Germany with historic Berlin and insane castles doesn't have anything on The Walker and iconic Spoonbridge and Cherry. Mostly, I love Minnesota, adventures and making friends.

What book(s) are you currently reading?
My cup of tea is non-fiction so I'm always reading something from the non-fiction shelves of my library. Once again I am reading Elna Baker's The New York Regional Mormon Singles Halloween Dance. I love this book. It’s a memoir and one of my favorites. Baker is hilarious and heartbreaking, perfection. I just finished the last sentence of Tina Fey's Bossypants and I'm not sure if it possible to love her more than I do right now. My next step is to get Fey's audio version and listen to it until I have memorized the entire book.

Another book that I just stole from my teenage younger brother is the first book in the “Hunger Games” series by Suzanne Collins and I like it. Even if it isn't non-fiction it is a good book so far. Plus, they are making it into a movie and my inner pop-culture snob just has to read the book before that movie comes out. The last book that I'm reading is actually fiction, David Sedaris' Squirrel Seeks Chipmunk. I just wrote a huge thesis on this book comparing it to “Aesop's Fables” in the spring in which I wanted to die. Now because I'm in love with Sedaris I'm reading it and really enjoying it, not looking for symbolism or analyzing the language. Its hilarious, smart and wonderful. Sedaris doing fiction is a great thing.

Have you ever had a crush on a fictional character? Who?
Yes. As a teen reader I fell in love with the “Harry Potter” series. While reading them I felt like I could be best friends with Harry, Hermoine, and Ron, I yelled at them when they deserved it and in the process developed a giant crush on Ron. I don't think it will ever go away and all of the men in my life just need to deal with it. Ron is wonderful, and I may or may not still have a crazy person worth crush on him.

If your favorite author came to Minnesota, who would it be and what bar would you take him/her to?
Well, as a person who doesn't drink I'd have to say: “sorry favorite author but I know nothing about bars and everything about coffee.” I think this would work for me though, because my favorite author is David Sedaris and in his last non-fiction book When You Are Engulfed in Flames he confesses that he no longer drinks. So I would take sober Sedaris to a few coffee shops (I can't pick just one), the first one would be Mugby Junction in Winona, because they have perfect coffee and it is my happy place. Another one I would take him to would be Patty's Place because its located in the quaint small town of New Prague and they have wonderful coffee and hilarious people (also, my hometown). I would want to sit around and people watch with him. The last coffee shop I would take him to would be Cahoots Coffee Bar in St. Paul because its adorable and has a back patio that any coffee shop in the Twin Cities would kill for in the summer.

What was your first favorite book?
My first favorite book that I can truly recall was actually a series, “The Boxcar Children.” I remember my mom gave it to me because she read them when she was a kid, and after that I was hooked. I pretended I was an orphan and had to live a boxcar too. I even adapted their eating habits. For one entire summer I ate a whole lot of blueberries and milk, the only reason I probably ever at actual food was because my parents made me. Now I hate blueberries, but I'll love the “Boxcar Children” forever.

Let’s say Fahrenheit 451 comes to life, which book would you become in order to save it from annihilation?
Is it terrible if I answer this in complete honesty and say that I have never read Fahrenheit 451? Yeah, I'm the worst English Literature major you've ever seen in your life.

What is one book you haven’t read but want to read before you die?
Well I guess I should maybe read Fahrenheit 451 but the book I would love to read before I kick the bucket would be Walter Isaacson's Einstein: His Life and Universe because my little brother read Einstein's Relativity:The Special and General Theory and I need to read better books than my science based brother.

I would also love to read Moby Dick by Herman Melville and Oscar Wilde's The Picture of Dorian Gray. I love books that are a little bit different and make me sound smart when I say that I have read them, and now with my impending graduation I might actually have time to read some of those big smart books.