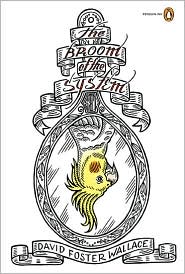 What if David Foster Wallace wrote a super accessible novel without end notes, but still filled with his signature loony characters, absurd situations and hilarious dialogue? Dum-dum-dum. He did! Before his brain got too so super big, while he was still honing voice and construction, DF-Dubs wrote a pleasant little novel that doesn’t require holing up like an agoraphobic and conceding defeat to muscle atrophy.

The Broom of the System only takes a month to read! And every single page of it makes sense as much as this mess of coincidences can possibly make sense.

Lenore Beadsman, always dressed in black Converse and a white dress, comes from the equivalent of Ohio royalty. Her people settled the town where she lives, which is in the shape of Jayne Mansfield’s profile, and next to the Great Ohio Desert — a bit of real estate built in the 1970s and filled with black sand. A bit of savage reference for people who perhaps have things too easy. She is engaged in a relationship with Rick Vigorous, who owns the publishing company she works for, and satiates her with bedtime stories submitted to his rag instead of satiating her the old fashioned way. She’s incredibly close to her great-grandmother, also named Lenore Beadsman, a word-nerd who goes missing with about two dozen other residents from a nursing home.

Lenore Beadsman the younger has a pet bird named Vlad the Impaler who has somehow developed a much more complex vocabulary. She has a brother who has a fake leg with a secret drawer for storing drugs and he refers to said leg as though it is its own being. Her best friend Candy Mandible likes doing it. The man who owns the building where she works is trying to get fat enough to take over the world with his space. Rick Vigorous is obsessed with her, creates flimsily veiled fan fiction about her and plies their mutual therapist for the deets on Lenore.

There are a ton of Infinite Jest-isms in this novel, the seeds that will eventually sprout into DFW’s most-famous work. And like IJ, it is heavy on activity and bare on plot. More incident-based than forward-moving.

Of course, I really dug the experience of reading Infinite Jest, which is like a harrowing event that a person survives as well as a great piece of fiction. The Broom of the System is less of an event, but still wonderful fiction filled with enviable writing in a style I call “the controlled free fall system,” in which it seems like a writer has just cut loose and started riffing and lets things go where they will. Some writers just free fall, which comes off as unfocused and willy nilly; DFW is really good at it. He sets his pen free, but doesn’t dissolve into something that is a dizzying cacophony of clarinets. This is why his stuff is so freaking great.

I think this makes for a nice gateway drug into DFW, for those who are Wallace-curious and don’t want to commit to something that weighs as much as a sack of flour.