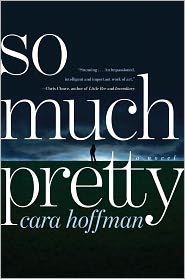 I’m not sure where to begin telling you about Cara Hoffman’s novel So Much Pretty because I’m still not entirely sure how I feel about it.

I picked up the novel after reading Hoffman’s Largehearted Boy Book Notes essay. A literary thriller with a soundtrack that included Cat Power, The Violent Femmes, and Woody Guthrie? Sign me up.

I enjoyed reading the book. It intrigued me. Unlike most mysteries I’ve read, I didn’t feel like I was being played when the gotcha moment came. It felt quite natural and surprising. That was all good.

But I don’t think this is the kind of book you fall in love with. It’s a novel of ideas wrapped up in a mystery, and while intriguing it wasn’t very emotionally satisfying.

So Much Pretty takes place in upstate New York, a small town called Haeden. It’s the kind of town where everyone has lived there forever and knows everyone’s business forever. The biggest employer is the Home Depot a few towns away, and the town in populated with a lot of small-business owners and the rich owners of the local dairy.

Enter into this town two doctors from New York City who have escaped the city with their small daughter, Alice, and their big ideas. Claire and Gene Piper escape to Haeden hoping to raise their own food and kind of get back to the land.

However, the land they’re getting back to isn’t doing so well thanks to that dairy. And it was this kind of pollution that drew reporter Stacy Flynn to the small town from Cleveland where she was an award-winning reporter. In Haeden Stacy is the editor of the weekly paper and spends most of her time digging around for her big story, the one that will put her on the map.

But Stacy gets derailed when a young hometown waitress goes missing. Wendy White is a pretty former high school swimmer who has just started dating Dale Haytes, the golden boy son of the dairy owner. One night she disappears and is gone for months. Eventually her body is found in a field.

It is Wendy’s murder that sends the town spiraling into even greater tragedy.

It’s some heavy stuff. The story of Haeden is told, in this novel, intermittently through Claire, Gene, Stacy, Barbara Haytes, evidence gathered by local police, papers Alice Piper wrote in school, Alice herself, interviews Stacy conducted in her investigation of Wendy’s murder, and many many more.

It’s a lot of people and ideas to keep straight, which is why while i was intrigued by the story I was left a little cold after reading it. I feel bad about that. Because the crux of a story is so emotional — the rape, murder of a young woman. Hoffman has a lot of to say about violence against women (and pollution and and revenge and classism and factory farming and. . . it’s a few too many ideas). The fury she injects into Stacy and Alice is palpable.

Even though I’m in the same ideological boat as many of these characters, I didn’t feel close to any of them. They weren’t fully fleshed out, didn’t feel quite real. They were more like paper dolls used to get a point across and no matter how much I agreed with that point, the story felt a little hollow.