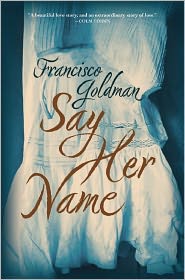 The character named Francisco Goldman has smelled his dead wife’s clothes. He has a shrine that includes her wedding dress and toys. He wears their wedding rings on a chain around his neck. He meets with her old friends, also still grief-stricken, sometimes falling into bed with one or another as both parties desperately try to resurrect Aura Estrada.

But the best voodoo that the author Francisco Goldman has done is write this novel-based-on-real-life Say Her Name. Here he takes the chance to exhaust Aura, research Aura, and write Aura in such a lovely way that you can almost see her in the pages — there but not there — like a flirty ghost.

Aura Estrada died when she was 30, nearly two years into their marriage, four years into their relationship. It was a body surfing accident, a fluky and not immediate death, the details of which Goldman saves for the final 50 super detailed pages of the story while he considers things like the life span of the wave that flipped her, the signs that might have indicated she would die that day, and his own level of culpability. Aura’s mother Juanita blames him for her death. And frankly, he doesn’t seem to not blame himself a little. She has involved lawyers and won’t relinquish her daughter’s ashes, not even a heaping teaspoon of them.

Before that, Goldman writes about Aura: A young woman from Mexico who collects degrees and is on her way to a career in fiction writing. A bit of a reformed wild child with a shaken background and an unstable mother. A woman who speaks in a fantastical way: She wonders whether a friend’s husband has a prosthetic limb (and what if it was made of cheese!) and contemplates the invention of robot shoes that come when you call (but can’t handle stairs on their own!).

She is smart and sunny and when she gets drunk she recites poetry. She sits on a folding chair on the patio smoking cigarettes and reading. She writes. She has always written. She flirtingly mocks Goldman, frequently referencing his age when it is apparent in his trick knee or graying hair and telling him he is ugly.

“You are so lucky, Francisco, she would say. You are the luckiest man on earth, to have a young, intelligent, talented wife who loves you the way I do. Do you know how lucky you are?”

After her death he researches his lost love: He delves into her childhood journals, the writing she did as an adult, he interviews her estranged father, he meets with friends to learn everything he can about his dead wife. He also studies waves to learn more about the science behind her death, and travels to places she wanted to see. He thinks of all the stories that died with her, the way that without her there is no one to fact check against his own accounts of their shared life.

And sometimes he sees her: In the branches of a tree, in a light during a memorial reading, laying with him in bed.

This is all very lovely and wrenching, this thorough tribute to Aura Estrada, in the way that love songs are especially beautiful when you know they are actually about someone real with whom the artist genuinely loves. The only thing that gives this soul mate-y story a dash of ew is that Goldman is 22 years older than Estrada, a scenario that seems to be his dating rule rather than exception. Before he met her and after her death he had a thing for getting handsy with twentysomethings while going pupil-to-pupil with 50. Most of the time in his relationship with Aura this age difference isn’t glaring, but when it is, especially when he continues to bed twentysomethings medicinally after Aura’s death … whoa it is.