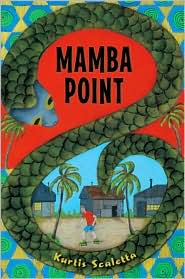 When you’re an adult a weird and mild form of multiple personality disorder overcomes you when you read Middle Grade Fiction. When you’re reading a really good book, in this case Mamba Point by Kurtis Scaletta, part of your personality is overtaken by the twelve-year-old you once were. You revel in the danger and intrigue of the story. At other points the grown-up part of your personality takes over. You gasp and think “stupid kid, what are you doing?”

I did both while reading about Linus Tuttle, a twelve-year-old boy who moves from Ohio to Monrovia in Liberia, Africa. Linus and his family move to the new country because his dad gets a job at the American Embassy there. On the plane ride to their new home Linus’ older brother, who had been Larry in Ohio, decides he’s going to reinvent himself and asks his family to call him Law.

The idea of reinvention appeals to Linus and he decides that he too is going to reinvent himself. No longer will he be quiet, anxiety-ridden, scared Linus. In Africa he will be brave and bold.

Linus’ resolution is put to the test the moment the Tuttles step off the plane. As they walk across the tarmac, a man with a machete runs toward the family and before they can even react, he’s chopping a deadly black mamba to pieces. The snake seemed to be gunning for the Tuttles.

Linus, who is kind of afraid of snakes (and really who isn’t? I hate snakes. I might even have ophidiophobia or whatever you’d label the fear of things that slide around on the ground without legs. Worms, snakes, are equally terrifying to me), seems to attract these rare and dangerous black mambas.

As Linus grows more comfortable with his kaseng, an African belief that some people have special ties to certain animals he learns from a man who sells masks near his apartment, he grows ever bolder. He begins to believe he gets his courage from the mamba, which he befriends. And it’s this friendship that had me alternately thinking, “oh, that’s so cute” (like when the mamba would rest its head on Linus’ arm) and “kid, don’t you realize that’s a wild animal that could kill you?”

But the book isn’t all snakes and animals. In fact, it’s more about getting to know a new place, trying to fit in and make friends, and accepting who you are.

Linus is a smart, funny kid and hanging out with him while he maneuvers this new place is fun and, well, educational. I’m nearly forty and I learned a lot from Mamba Point without ever feeling like I was being lectured. That’s really the best kind of learning, isn’t it?

While I enjoyed the air of mysticism surrounding the snake, I really liked how Linus learns about and deals with the privilege he has of being a white, American kid who gets to go to school and always has food at hand.

There’s a scene where Linus is playing with a neighbor kid, a black American boy, and he asks him if he finds it racist how Africans are often portrayed as cannibals. Since the kids can’t come to a conclusion on their own they go out and ask the grown-ups, who happen to be some bigwigs in the Liberian government. The scene is kind of awful and awesome at the same time. You can feel the tension when Linus asks the question, and the incredulousness of the adults who are a little disarmed at his inquiry. It’s a great, great scene.

The whole book is pretty great and I’m not just saying this because Kurtis is a friend of mine and we’re in a writing group together. I was a little unsure about this one. . . snakes? Africa? Those are things that usually fall outside my areas of interest and yet, reading Linus’ story was engaging and funny and I’m glad I read it.