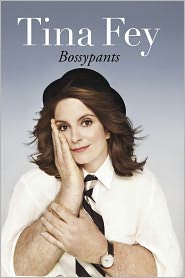 At about the mid-point of Tina Fey’s memoir Bossypants I lost that dewy baby chicken fluff of naivety and had a realization: It must be very easy for a celebrity to write her own story. Before Tina Fey pounded her first space bar on the old typewriter, she knew that she had an audience of teetering primetimers who would be satisfied with a few chuckles, a childhood photo featuring a shag haircut and couple of anecdotes starring Alec Baldwin that were exclusive to this flavor of book glue.

Let me preface this by saying that Bossypants is a riot. I wasn’t going to buy it. I was going to sit in a bookstore and steal the words with my eyeballs. But I cracked up one too many times to put it back on the shelf. This made the man in stained sweatpants who brought his own blanket to the store look at me like I was crazy.

Fey’s memoir is a bit of a variety show, a mix of personal anecdotes, lists, re-imagined Q&As between a gaggle of besties dishing on menarche and a satirical prayer written for her daughter with tips about not laying with drummers or being damaged in a way that attracts creepy older males — a prayer that by now at least one of your Facebook friends has brought to the newsfeed nearest to you.

She talks about growing up, working at a theater camp, working at the YMCA. She talks Second City and SNL and chats up “30 Rock.” She lists skills to master for the next time you’re in a magazine photo shoot. She has bits from skits she has written, or her colleagues have written. She lists how to celebrate “Me Time” in a life that includes a child.

The biggest thing she reveals in the writing of this is that she is probably the funniest person in the world.

From some helpful instructions about a photo shoot, she suggests the correct response to when a photographer asks what music you want to have playing.

“Remember that whatever you choose will be blasted through the loft and heard by an entire crew of people who are all so cool that the Board of Ed. officially closed.

Just murmur “Hip-hop,” or make up the name of a hipster-sounding band and then act superior when they’ve never heard of it. “Do you guys have any Asphalt of Pinking? [disappointed] Really? [shrug] Whatever you want then.”

And from when she talks about her struggle putting in contacts to audition for “Weekend Update”:

“If you’ve never had to do it, I’d say it’s not quite as quease-making as when you lose your tampon string, but equally queasish to a self-breast exam. If you are male, I would liken it to touching your own eyeball, and thank you for buying this book.”

Obviously I wasn’t expecting the Dalai Lama or Haruki Murakami with this book. What I expected is exactly what I got. But it kind of feels like someone just told Tina Fey to find a way to fill 250 pages, make it funny, and then had a good chuckle about how people just want to read something by her, a little something-something. So she stitched together some stories, some satire, some alternative formats for storytelling and added some of her kickiest punchlines.

That is to say it is a little hollow with hilarious frosting.