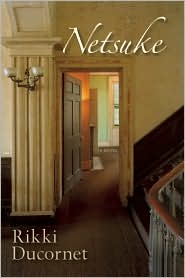 Back when I was in my 20s, and before 9/11 made saying such things tacky, one of my friends used to refer to the systematic dismantling of ones life as “Crashing the plane.” When we engaged in some sort of horrific behavior, using erratic means to quickly thrust a relationship status into critical condition, when we did something passive aggressive at work that caused the loathing to show throw the seams, any sort of rash bad behavior that would implode on itself, that was crashing the plane.

The main character in Rikki Ducornet’s novella Netsuke is definitely trying to crash the plane.

When the story opens, the world’s least ethical psychoanalyst is out for a run. He exchanges glances with woman on the path and a few seconds later they are rutting in the woods. This sparks some inner monologue about his dual nature: The doctor with a practice in an office on his property, married to an artsy perfectionist who collects netsuke, Japanese ornaments. But he is also a bad, bad man. Bedding a parade of store clerks, strangers, and patients including a cutter and a cross dresser. Back at home the psychoanalyst takes his daily hour-long shower to wash away the debauchery and become the man his wife believes him to be.

Meanwhile, he wants to get caught. Flimsy alibis, taking her to restaurants he shares with lovers, telling her details from sessions to give the relationship seedlings of doubt and mistrust. Sometimes just saying the word “woman” aloud to her gives him a thrill.

When she begins to shift into frustration over his busy schedule, or she starts to sense something is amiss, he makes empty promises about getting away together soon. In the later part of the book, Aikio is given a voice and a reader finds that she knows more than she thinks she knows.

There is some wonderful writing here, although better if you read the book in one sitting. Coming back to it dulls the flow and makes it sound a little overly pretty and self conscious. The psychoanalyst in particular has this sort of manic and brainiac-ness to him, like a Poe character, with shifts between first and third person that really seal him as this sex addict slash narcissist. Reading it feels like stumbling on an indie film you’ve never heard of starring Ben Kingsley.

Plotwise, there isn’t a lot to hold on to here. It is a lot of the same, a rolling boil of conflict that doesn’t escalate quite enough. His relationships never getting beyond the physical. And when the story shifts to include perspectives of his lovers and wife, the voices aren’t really distinct. Even a moment when two of his patients discover they are both getting special treatment is a sort of gray area that lacks tension.