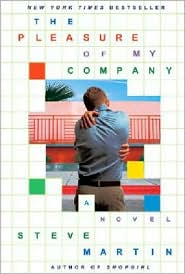 Daniel Pecan Cambridge lives in a prison of disorder. His life in Santa Monica is a highly structured life in which he must find a way to the Rite Aid that doesn’t involve stepping off a curb. He is mentally unable to hold a job like the one he once had at Hewlitt Packard. He is unable to use public transportation unless he can draw lines between passengers based upon the plaids and stripes they are wearing. He prioritizes his mail into three piles, savoring letters from his grandmother in Texas like they are the middle part of an Oreo.

When Steve Martin’s novella The Pleasure of My Company opens, Daniel has been cleared of murder charges and has developed a friendship with his neighbor Philipa, an actress who doesn’t know he is slipping her Qualudes. He is visited regularly by an interning psychology student named Clarissa, whom he lies to about his life. He has it bad for Elizabeth, the Real Estate agent who is trying to fill some apartments down the street.

A reader might go through these stages in the early parts of Martin’s second whack at fiction: 1) Ha! That Steve Martin. This is hilarious! 2) Oh my. Should I be laughing at a character who has such a debilitating case of OCD and a touch of Asperger Syndrome? 3) Oh my aching heart!

This list of funny compulsions is all fun and games until Daniel gets a letter from his grandmother who lives in Texas, his benefactor — whom he prefers when she isn’t sending him checks, as much as he needs the checks. Then everything kind of shifts when you realize he isn’t pure, neurotic comedy. He’s a being with feelings who is trapped by things like curbs, the wattage of light bulbs, and expressing emotions.

“The irony is that the one person who gives me money is the one person I wish I could hand the check back to and say no, only joy can pass between you and me. I found it difficult to write back. But I did, stingy with loving words because they didn’t come out of me easily. I hoped she could read between the lines.”

Daniel’s life changes when he is invited by Philipa’s boyfriend Brian to go for a run and he realizes that by following Brian he can soar over curbs, and when he enters an essay contest in search of the most average American. And when he starts to learn more about Clarissa and the complexity of her life with child and hostile ex.

This is a pleasant little story. Nice, funny, easy. And it wraps up tightly like a burrito.

It has taken reading three books by Steve Martin to understand that he is never ever going to do anything super terrible to his characters. This is both frustrating and also alleviates a ton of the stress of reading and worrying about characters. Children won’t die left in the hands of a man who has debilitating street-crossing habits. A character who has fallen in love with his therapist will not do anything super embarrassing to proclaim his feelings. Even the obsessive compulsive gets a slight break when he takes up with a girlfriend who categorizes his ticks into three headings: Acceptable, unacceptable, and hilarious. As though requited love can cure him of OCD and Asperger Syndrome.

Steve Martin’s novels aren’t going to break your heart or make your pulse race. They are simple stories with likable characters whose stories end nicely without shrapnel or gritty nails or paint splatters or messy hair or the need for hand sanitizer.