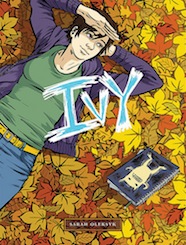 Ivy’s kind of a bitch. She swears in class, she spits in people’s faces, and she seems to be angry about everything. But she’s got some good reasons for being such a bitch. Her bitter, single mom is trying to force Ivy, a high school senior, into business school. Ivy dreams of art school.

Ivy’s friends are the types that do stuff without her, purposely not include her because she’s always so angry and yet can’t see that she’s so angry because they’re always making her feel unwanted. She has problems with a teacher that are partly Ivy’s fault and partly the teacher’s.

Then there’s Josh. A teen photog she meets while checking out art schools. The only problem? Josh lives in Massachusetts, far away from Ivy in Maine. Plus, he has a boatload of his own issues.

Does any of this give Ivy free reign to lash out, sometimes violently? Nah. But who wants to read a book about a character who always does the right thing? Not me. It’s much more interesting to see Ivy act out and then deal with the consequences of her actions.

Ivy a graphic novel by Sarah Oleksyk perfectly captures that feeling of hope and hate and helplessness that is high school. Oleksyk captures this time so well that sometimes reading the book is uncomfortable, even for someone who has been out of high school for twenty years.

Or maybe the uncomfortableness is from being so far removed from high school and seeing that Ivy is on the verge of something great or something devastating. She’s got two paths in front of her — college or following a sick boy across the country and falling into a life of addiction. Even though Ivy’s kind of bitch, she feels quite real and as a reader, I wanted what was best for her.

The art in Ivy is wonderful. It manages to do what I like so much about graphic novels — expand the storytelling beyond words, adding another level that can only be captured with pictures. From the smug looks on Ivy’s “friends” faces to her abject loneliness and confusion, te art elevates the story where words to explain these things would just weigh it down.

Ok. Now this is sort of off-topic but I have to add it in because. Well, because I just need to. If you’re a music fan, specifically a fan of The Replacements, this book embodies the song “Sixteen Blue.” I heard the song on every page of the book. It probably colored my reaction, but in a very good way.