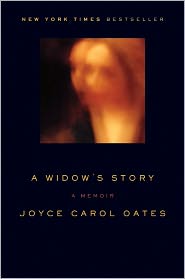 I think I handled the grieving process better when John Dunne died than when Raymond Smith did.

Something about Joyce Carol Oates’ memoir A Widow’s Story, chronicling the aftermath of her forever husband’s sudden death, had me weeping before appointments, at Subway, and especially in bed. I don’t remember Joan Didion’s version, which proceeded this one by about five years and included a sick daughter, making me feel like someone broke my heart in half and dropped the pieces into a garbage disposal.

The world’s most prolific writer*, a woman who seemingly emits better-than-decent novels like they are mere finger belches, spent almost a year in silence unable to make enough words or the right words to cure the ache of losing her life partner. But when she finally does get down to the business of recording this place in time, she does it with sentences that are fits and bursts. Little poetic blurts, sentences riddled with long dashes that seem perfectly in line with the brain broken in sorrow.

Oates opens her memoir with a time both she and her husband should have died. A year earlier they had been in an accident that triggered the car’s airbags and left them bruised — but giddy with how alive they still were. Then when it wasn’t expected months and months and months later, Ray developed pneumonia, was hospitalized, and got a fatal infection in the hospital. Oates received the terrible phone call — he was still alive, though — rushed to the hospital, but got there too late. She imagines the way he died surrounded by strangers late at night. The paragraphs where she collects his things, his glasses, his papers is one massive soul suck.

From there things get a little repetitious. The minutia and the legalities involved with having a dead spouse, the inability to sleep paired with the unwillingness to take sleeping pills, the avoidance of certain rooms in the house they shared. Ghost images. The fear of learning something about her husband that will change the way he is remembered.

Friends invite her to dinner. She exchanges emails with Richard Ford and Edmund White. She considers her cache of drugs and imagines how easy it would be to kill herself and then later, how much she doesn’t want to do that.

There are some really magical scenes where she brings Raymond back to life by virtue of talking about their past. They met in a lecture hall. They spent a wretched year in Texas, which was worse than the years in Detroit. Raymond loved his garden. And the weirdest fact from the book: Raymond didn’t read her fiction.

JCO marries again less than a year after Raymond’s death. The romance isn’t featured in these pages, but husband No. 2 gets the briefest of brief mentions in the final page of the book. After 400 plus pages, it doesn’t do much to bandage the ache of the previous pages, but it is a little bit of cheer.

*This has not been proven by science.