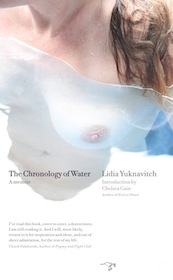 Sitting on my couch. Listening to noninvasive, lyric-less music with headphones. Reading Lidia Yuknavitch’s memoir The Chronology of Water. I stop. Check the time. Two hours have passed since I last came up for air. Whoa. She just drugged me. Plopped me in front of a psychedelic screen saver and had her way with my brain when I wasn’t looking.

My friend sent me an email first telling me that she’d had a dream that she told me we don’t like the same books. We don’t in real life, this is true, she acknowledged in the letter. Except Haruki Murakami. Still, she tells me, read this book. But first she tells me that it starts with a dead baby and then segues into incest, heavy drug use and sex.

It does start with a dead baby. It does have heavy drug use. There is, indeed, sex. And there is this unconventional sentence structure, poetic snippets, soul-squeezing scenes that left me dizzy. This is not my style of reading at all. Prosey-prose, heavy with metaphor. The kind of writing that sounds like it should be read aloud to a room full of people who will later deconstruct it like they are putting puzzle pieces back into a box. In the hands of a lesser writer, which is to say almost any other writer, this would be too written-y and self-conscious. But damn Yuknavitch has a way with words. She knows how to write a word like “bloodsong” and not have it sound like a workshop cliche.

Consider the chapter at about dead center where she writes the story of falling in love with the man who becomes her second husband. It is about five pages heavy on activity and light on periods that reads like fast-forwarding through video footage of a relationship from beers and bars and bikes to the part where he meets someone else and Lidia loses a bunch of grief weight and everyone tells her how pretty she looks. It is pitch perfect.

She is a swimmer, from birth, probably until death. And everything in her life comes back to water. She trades her strong back and wicked stroke for full ride scholarship to get out of Florida and away from her sexually abusive father and her alcoholic, limping mother. She goes wild in Lubbock, Texas. Falls in love with a James Taylor-sort. Marries him even. But they are separated when she leaves for Oregon to live with her sister, bulging with baby, and he follows her and moves into a place across town. The baby is born dead. Her ashes are spilled into water.

So this book is really something. The scenes painted in a fantastic way and the stories are edited to a sexy, sometimes shocking, truth: Lidia, drunk, sitting on a statue of Buddy Holly. Getting into a fight with her boyfriend. Screaming at him as he drunk drives them home, passing out before they get there. She opens the car door and runs off into the night; Lidia and her best friend picked up by a boyish-looking classmate, a woman who whisks them away for a free love weekend at a hotel; Lidia having a manic laughing fit, waist-deep in water, while trying to get rid of the ashes of the daughter that was stillborn.

This book made me want to go swimming. Me. A non-swimmer. A person who hates to get her face wet. She made me want to jump into the deep end, feet first and sit on the floor of a pool, watching people float over me. She’s that good.

I will concede that I can only read sentences referencing how wet underwear/panties/the seat became after this or that happened without tiring of it. She uses it literally, she uses it metaphorically. It loses its energy. And every once in awhile Yuknavitch turns to face her audience and address the reader, which is distracting. Other than that, big ups.