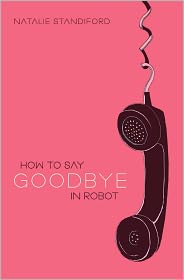 Don’t let the bright pink cover and the telephone fool you, How To Say Goodbye In Robot by Natalie Standiford is not the type of YA romance novel you might expect. In fact there were times where I snottily thought “Oh, I know where this is going.” But, I was wrong. I worried for nothing, because Standiford totally pulls it out at the end.

The book follows Beatrice Szabo through her senior year at an exclusive prep school in Baltimore, Maryland. Bea doesn’t have a lot of friends, because she’s never stayed at a school for more than a year. Instead, she and her mom are dragged around the country by her dad who is a hot-shot professor.

When the family arrives in Baltimore, Bea’s mom starts to fall apart. Mom gets hyperemotional, and dresses strangely. Mom calls Bea a robot for not falling to the ground and rending her garments over the death of a neighbor’s hamster. Some of the scenes between Mom and Bea are tough, and I often wanted to hug Bea and tell her being a Robot Girl was just fine.

Unexpectedly, Bea makes a friend. Jonah is a pale, haunted boy who sits next to Bea in assembly, thanks to the alphabet. The other kids at school call him Ghost Boy, not just because he’s so pale, but because of a tragedy in his past (I won’t spoil it for you).

Bea and Jonah quickly bond over a strange late-night radio talk show called Night Lights. Even while the “popular” kids in school try to lure Bea with her newgirl cache into their clique, it’s Jonah who intrigues her and she chooses him every time — even when he’s unworthy. A lot of the tension in the book circles around Jonah and his family troubles, which is a little odd because Bea’s family’s falling apart at the same time. However, Jonah’s troubles involve a lot of mystery which makes them totally more interesting than a marriage on the rocks.

Jonah’s a weird, sad kid. As a reader, I was not his biggest fan. I found him kind of manipulative and cold, but at the same time I wholly understood why Bea liked him so much and never grew frustrated with her loyalty to him even when I wanted her to do something else.

I think it’s this somthing-elseness that makes How to Say Goodbye in Robot so charming. Every time you think the book is going to do exactly what you predict it goes somewhere different.

The only thing I really questioned in the book was the relationship (and struggles with it) between Bea’s parents. I can’t quite figure out where they fit in the scheme of the bigger story, and there were some things that Bea, who is a very smart girl, takes entirely too long to figure out.

But even that minor annoyance is worth putting up with just for the Night Lights. This cast of minor characters are awesome. My favorite scenes involved the Night Lights and I loved how Standiford showed us (rather than told us) how you can build friendships and community with people when you least expect it. Which is kind of the lesson Bea needs to learn.