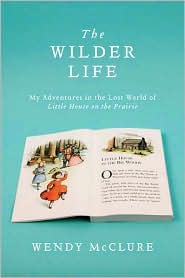 First of all, a confession. I got the Little House on the Praire books, a yellow box set, for christmas 1981. I know this because my mother wrote my name, address, phone number, and date in each of the books. I was nine. I still have the books. They sit in their faded yellow box in a bookcase my Grandpa bought at a rummage sale sometime in the 50s. I don’t think I ever finished reading all the books.

Subtitled My Adventures in the Lost World of Little House on the Prairie, the memoir is about McClure’s pilgrimage around the upper midwest (and New York at one point) to many of the places Laura Ingalls Wilder lived. McClure, who had recently lost her mother, was on a journey to re-capture the “Laura World” she imagined in her youth. A simple, more innocent time.

She discovers, “Laura World” probably wasn’t as simple or innocent as she imagined — what with the racism, the poverty, and the greedy land grabbing.

First, you should know this book is hilarious. Seriously, laugh out loud funny in the actual way where noise comes from your body and not in the LOL way of Internet communication.

At one point she explains that the character of Nellie Oleson is a composite of three different girls in Laura’s life, a “blond Frankenstein assembled from assorted bitch parts.” There’s also a scene where McClure and her boyfriend, Chris, go to a farm for “Homesteading Weekend” to learn all kinds of Laura-like skills. McClure even thinks she’ll have a chance to show off her newly-acquired butter-churning skills. As the weekend unfolds they slowly realize their surrounded by religious zealots preparing for the end of times.

If the “Little House” books would have been half as funny as McClure’s, I’d have probably read them all over and over again.

Second, it’s really informative but not in a dry or boring way. McClure did her research (there’s an extensive bibliography in the back) but never comes off as pedantic. She shares what she learned about the Ingalls, the Wilders, and Laura’s rebellious, sort of awesome/sort of awful daughter, Rose much the way you’d tell a friend “guess what I learned today.” She also shares the struggles she has reconciling Laura’s actual world with the “Laura World” of her imagination and the books, which are actually novels.

While this is all really good and fun to read, it was McClure writing about her own struggles that I liked the best — reconciling the unsavory bits of history with the family she loved so much growing up; defining who she is again in the absence of her mother; and the longing for a time other than “now” when things seemed easier and better.

And it’s this personal journey that McClure takes while exploring Laura’s world that makes this memoir such a great read for Little House fans and non-fans alike.