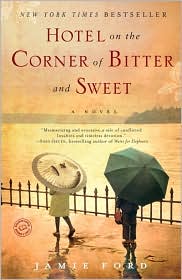 I recently had the occasion to read a nice book. It was one of those stories with characters who have tricky relationships with parents and innocent love feelings for members of the opposite sex and it was all set against an important historical backdrop. There was war and racism and bullying and kids skittering through the streets of Seattle chasing a jazz scene that set aside its saxophone and embraced those tender under-agers.

Plot. It was oozing with plot. I couldn’t put it down. And it was easy, with uncomplicated sentences and uncomplicated ideas and all the foreshadowing pointed in the right direction. And even though things were tragic and times were hard and it really felt like there would be redemption on at least some level. At least the romantic level. Maybe not on the internment camp level. But how do you fix that in retrospect? Write a check, recreate new old baby photos. A public apology-that-must-have-been-awful from a public figure?

I read my head off.? I finished it in about six hours, closed the book and thought: “Man, I hate tidy.”

Jamie Ford’s debut novel Hotel on the Corner of Bitter and Sweet is nice. Well, as nice as this story can possible be. Henry is a Chinese American on scholarship at an almost all-white school. His classmates are a hostile bunch of racist street thugs dabbling in hate crimes. Things get a little sunnier for Henry when he meets Keiko, a Japanese student who is also on scholarship. They bond over jazz music and really come to dig each other. Things are shaky at home for young Henry, whose parents have banned Chinese as the official language of Chez Lee. Since they don’t know English, things are a little quiet.

The story is split between Henry as a teenager in the 1940s and Henry as a widower in 1986. In the later years, he’s still running around the same neighborhood he grew up in, and his memories of the 1940s are triggered when items belonging to Japanese families who were sent to internment camps are found in the basement of the Panama Hotel. Henry sees a red parasol that reminds him of his old friend Keiko and goes jetting off down memory lane. Sneaking into the jazz club, holding on to her family’s keepsake photo albums, becoming disowned by his father when the old man realizes young Henry is chummy with a Japanese girl, visiting Keiko at the internment camp, and the letters they wrote. Meanwhile, in the present day, he’s negotiating his own communication issues with his college-aged son.

Again, it’s all really nice. Too nice. It’s not that it was a waste of time. It kept me turning the pages. It just wasn’t on my wish list. I guess that means it was a “It’s not you, it’s me” read. This is exactly the kind of book I’d give to someone who likes nice lit. Maybe I’d give it to a stranger whose name I drew for a gift exchange, after another stranger pulled me aside and said “Margaret just loves to read.”