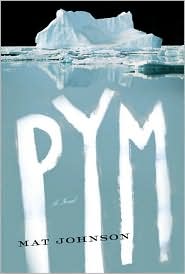 Pym by Mat Johnson is an adventure filled with satire, Edgar Allen Poe, and monsters and woven throughout the novel is social commentary tackling race and whiteness in our society and in Edgar Allen Poe's only novel, The Narrative of Arthur Gordon Pym of Nantucket.

In order to understand Johnson's novel you don't have to read Poe's first, which is good since it wasn't exactly praised by critics. African-American literature professor, Chris Jaynes, the lead charater in Pym, also isn't the biggest fan of Poe's novel, but he explains it thoroughly because you need to understand why Jaynes gets a crew of people and goes to Antarctica.

I have not read Poe's novel, but from the analysis in Pym I can tell you that it's the story of a white man named Arthur Gordon Pym who stows away on a whaling ship looking for an adventure. He befriends Dirk Peters, a man with some Native American ancestors, and they live through a shipwreck, mutiny by black slaves, and even some cannibalism. They eventually land on a remote tropical island, Tsalal, somewhere near Antarctica, where they encounter hostile black natives. Pym and Dirk escape from the natives and the novel ends abruptly with a huge white figure rescuing them.

I'm sure I'm not doing Poe's novel justice, or Jaynes' analysis of it in Pym, but when Jaynes comes across a woman who has the journal of her real ancestor, Dirk Peters, you now know what that means. Was Dirk Peters real? Does that mean Arthur Gordon Pym was real? And if they were both real, is there some tropical, untouched island full of black natives who have never been captured or conquered by outsiders?

For an African-American professor who researches whiteness in American literature, Jaynes can't pass up taking a trip to Antarctica to find the truth. He rounds up an interesting group of characters – his chubby, Little Debbie snack cakes addicted friend, his cousin and his lover, and his ex-girlfriend and her husband – and they set sail for Antarctica.

I don't want to give too much away by telling you what they encountered, but there is more than just ice in Antarctica. Monsters and a 200-year-old person, to be exact.

Pym is a fabulous, intelligent adventure, and while the ending wasn't surprising to me, the story that got me there was compelling. I loved Jaynes' sarcastic voice and his crew of characters, most importantly his friend obsessed with Little Debbie snack cakes. Little did he know that he would be able to use his Little Debbies to barter in Antarctica.

I also loved the discussion of whiteness in Poe's work and our society; it will stick with me for a long time. Questions like why does Poe's work depict the black natives horrendously and then a large white figure as the savior? Those questions are then turned around into some simple things in society, like why white rats are pets but dark ones are vermin? I'm not saying either of these questions are the most valid ones to ask, but throughout the novel this discussion really intrigued me, and if the idea of whiteness in literature and society was a Jeopardy category, I feel like I’d be pretty good at it now. That makes me happy.

The amazing descriptions of Antarctica and what happens to them there was also great, so great that it actually appeared in my dreams the night I finished this. When a novel appears in my dreams, as vivid as if on a movie screen, what more is there really to say? Lovers of classic literature and fantasy, take notice.