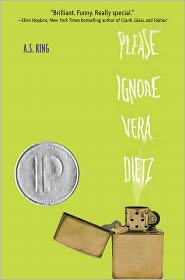 Vera Dietz is trying to ignore a lot of things: that her mother abandoned her when she was 12; that she’s only 18 and works a full-time job as a pizza delivery technician while still managing As in school; that her neighbor routinely beats his wife; and then there’s Charlie.

Charlie, the neighbor boy (son of the wife beating asshole), was Vera’s best friend for most of her life, until he died at the start of their senior year. Matters aren’t helped that Vera was pretty pissed at Charlie when he died, and she knows more about his death and the situation surrounding it than she’s letting on.

Okay, now that you get the gist of Please Ignore Vera Dietz by A.S. King, let me tell you right off the bat: I loved the crap out of this book. It’s always tough to pinpoint why you love something. The heart wants what it wants and all that, right?

But there was a scene, and it comes later in the book, that sealed the deal for me. It was one of those scenes that gets to the kernel Vera’s problem, her dad’s problem, and shows that A.S. King is damn brilliant.

Throughout the book Vera’s dad tells her to ignore a lot of stuff, specifically the domestic violence going on next door. He wants his daughter to keep her head down, make good grades, earn money to put herself through college, and stay away from alcohol since it’s her genetic destiny to be an alcoholic (both her dad and her grandfather were alcoholics).

So in this scene, Vera is telling her dad about the creepy guy she delivered pizza to the night before. The dude answered the door sans pants with hardon waving in the wind. Vera tells the story with dramatic flourish and Dad loses his shit, wondering why she didn’t call the cops or do something about it immediately. Vera’s unfazed and a little puzzled by his concern.

The scene wonderfully illustrates so much– Vera and her relationship with her father, her confusion regarding things that should and should not be ignored, and Dad’s sudden realization that things aren’t as peachy keen as he’d like to think they are.

That’s just one scene, but the entire book is phenomenal. It’s funny, sad, and a lot happens. King draws us into the mystery surrounding Charlie’s death without ever being coy. As a reader, I never felt like she was holding anything back. That’s tough to do, especially for me the queen of sniffing out a coy.

Told alternately by Vera (with ample flashbacks that show how her relationship with Charlie grew and then disintegrated), her Dad (who is a fantastic though flawed parent), Charlie, and the Pagoda (an architectural oddity in Vera’s town) the book follows Vera as she struggles with her grief (she’s often haunted by 1000s of Charlies), her senior year, and finding the courage to do what is right.