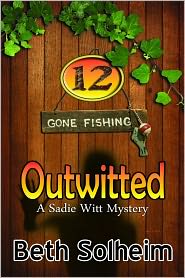 A peaceful cabin resort in northern Minnesota which is owned by an eccentric woman and her sister ~ add a corrupt judge who believes one of the cabins on the resort should belong to him ~ throw in a baby kidnapping ring ~ a couple of souls needing to complete a task before entering the next realm ~ and you’ve got another Sadie Witt mystery.

Sadie is back and feisty as ever in Beth Solheim’s latest book, Outwitted. As a death coach (helping souls pass to the other side), Sadie’s job is hard enough when dealing with strangers. It becomes more complex and personal when the decedents are people she knows. It makes it next to impossible when one of them is an impish six-year-old who doesn’t know that she’s dead.

When a baby is kidnapped from the maternity ward at the local hospital, Sadie not only has to deal with frightened guests, the law, and Clay (the drunkard ex-husband of Nan, the funeral director and best friend) but also making sure two souls cross over before their time runs out.

Throughout, my favorite scenes take place during the interactions of the sisters. Sadie and her twin sister Jane are alike insofar as they are both sixty-four ? from there the resemblance ends. Sadie wears miniskirts, thongs, sports a snake tattoo that people mistake for a worm, spikes her hair, and acts like a teen (sometimes tween); Jane dresses conservatively and acts older than her years. While they are constantly sniping at one another, the love is clearly shown through the writing. Although, when Sadie gets a picture of Jane and posts an ad on a dating website without Jane knowing, I don’t think I’d be as forgiving as Jane. Still, it’s scenes like that that keeps the story fresh.

‘Jane paced in front of the kitchen table. “No wonder he knew so much about me. What did you tell him?” Before Sadie answered, Jane added, “Now I’ll never be able to face him.”

“That’s ridiculous. If you like him, what’s wrong with seeing him again?”

“He’ll think I’m not capable of finding my own dates.”

“He already knows. I explained it when I posted your photo on the website.” Sadie grimaced as Jane let out another shriek’ p.86

All combined, this makes for an enjoyable, and quick read. Although Outwitted is a stand alone novel, I still recommend reading Witt’s End first just for a deeper understanding of Sadie and Jane Witt. Solheim writes colorful, eccentric, and flawed characters as well as a good description of life in a northern Minnesota resort. Outwitted is a light mystery, perfect for taking to the beach or the park for a nice and relaxing afternoon read.