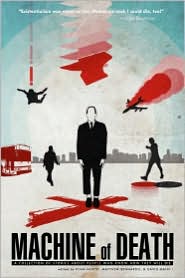 It all started with this Dinosaur Comic where T-Rex had a great idea for a short story – a world where everyone knows how they're going to die. But T-Rex is a bit sneaky and it's not really that simple. A person may be told “old age,” but that may not mean dying when very old; it could mean an old man will kill him.

That comic sparked a lot of interest and the result is the best short story collection I've read in a long time, Machine of Death: A Collection of Stories About People Who Know How They Will Die.

One of my favorite stories is “Almond” by John Chernega and I had never heard of Chernega before. Quite honestly, I had never heard of any of these short story authors before, and this is probably because they didn't look for big names with this collection; they looked for good stories. But publishers didn't want to publish a collection with no-names, so the editors, Ryan North, Matthew Bennardo, and David Malki, decided to publish it themselves. And, to warm my librarian heart, they even put the work in the Creative Commons and you can find it freely available online.

But back to Chernega. I had to look him up after reading “Almond”, and to warm my Minnesota heart, he's a fellow Minnesotan and this is his first published work. Way to go Chernega!

“Almond” is the log of a man who tests the Machine of Death. He tests four samples, day after day, to verify that they have the same results, one of which is death by ALMOND. Thinking no one is reading his log, the log turns into a personal journal of the man who tests the machine but refuses to get his own prediction. Through his journal we learn how society starts to change, how businesses start requiring workers to turn over their predictions, and eventually how the government interferes and protests erupt across the country. I don't want to say much more since I will ruin the story if I do, but reading about society through his snarky journal, and the great ending, is well worth it.

There are other fabulous stories, too, like “Aneurysm” by Alexander Danner, where the Machine of Death is turned into a party game. Or the clever “Love Ad Nauseum” by Sherri Jacobsen, where the story is told through some funny personal ads. Or “Heat Death of the Universe” by James Foreman, where 18-year-olds who get the prediction of NUCLEAR BOMB are tested and rounded up by the FBI. Or “Killed by Daniel” by Julia Wainwright, where a man gets a KILLED BY DANIEL prediction, and Daniel just happens to be his son’s name. Or the priceless story by Brian Quinlan, the title of which I am not going to tell you because it will give it all away.

I was excited to read every story in this collection. The premise of a death machine drew me in, but the great stories kept me wanting more.