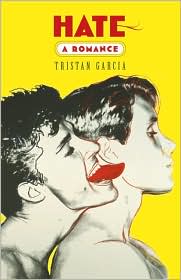 It seems Tristan Garcia never met an extremism he didn’t like.

His novel Hate: A Romance lunges into so many thorny issues it scrapes the surface of them all and, somehow, escapes clean of any residue of substantial insight. Social acceptance of gay men, the role Muslims play in a largely secular society, anti-semitism – there’s hardly a hot topic that doesn’t get crashed into by this runaway freight train of a book.

It’s good for authors to confront unresolved problems in our world, of course. If they didn’t wade into some of our swampiest issues, we’d lack clearly articulated positions which we can take under consideration ourselves. My problem with Hate – a “controversial” first novel that won France’s Prix de Flore – is that Garcia takes on too much and takes it all too far. His characters, including a flamboyant gay man who advocates against condoms and viciously defends AIDS as a unique possession of the gay community, never deliver any real payoff. They’re meant to be asburd, but (perhaps because of problems translating the book from French, or maybe because of cultural perspectives foreign to this American reader), Garcia’s parody and commentary lack the necessary bite.

Once the social critique component of Hate has been dismissed, there isn’t much left. The story is secondary and Garcia’s writing isn’t mean to be pretty or enjoyable. Finishing Hate made me feel like I had just read an essay assigned for a class, one whose whole point never became quite clear.