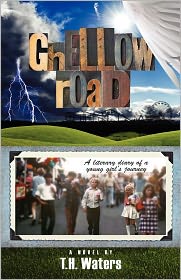 The front cover is a bit confusing. It says the book is a literary diary and also a novel. I guess it can be a made up diary, but Ghellow Road by T.H. Waters reads like a book of creative nonfiction.

There are also quite a number of people to whom this book is dedicated, and who I’m willing to bet are active participants (even though the names have been changed) ~ thus giving the book a truthful flair. In the book, Theresa Waters (again, pointing to nonfiction over a novel) is a young girl trapped in a dysfunctional family whose father is coated in depression, and mother, schizophrenia. As an author, T.H Waters does an excellent job of watching through the eyes of a young girl while she faces her parents crumbling marriage, a father who sees himself as a failure, a mother who can’t get out of bed for days at a time, a brother who has no real connection with her, and friends who don’t know and couldn’t understand even if they did. Her use of language is also very emotional and Waters uses that emotion to keep the reader enthralled.

‘A few, final seconds of silence would seep beneath my heart’s secret door, the one where I’d hidden away my trust, my vulnerability. “When are you going to come home?” I’d ask in quiet desperation. The answer was always the same.’ p. 191

There are also passages that are almost poetic. ‘I was born in the arms of the City of Lakes.’ opens the book.

The book centers on Theresa, and in true child fashion, the world revolves around her. T.H. Waters doesn’t sugarcoat the life she went through as a young girl or hide her shortcomings. That’s the book’s strongest aspect and also its weakest. She wonderfully paints Theresa as an entire human being, complete with flaws. The downside for me was because it was so centered, people popped into and left her life with no explanation. There were a lot of questions, as a reader, I wanted answered. I also had a slight problem with time lapses. Something dramatic would happen and suddenly it would be weeks later (which, if I can remember that far back, is exactly how a kid thinks but I still found it disconcerting). I suppose I should compliment the writer in that she had me so intrigued as to really care about Theresa that these minor annoyances weren’t even close to making me want to stop reading.

There are memoirs where kids have had it worse (Theresa was never sexually abused, hungry, or homeless), but she still had a terribly rough childhood with no real stability, being bounced from one home to another, and witnessed things no child should have to experience. There are no chapters in the 290 page book, but plenty of good breaking places if you only have short periods of time to read. But that might be a problem ~ although most of the sections are only a few pages long, it will be hard to put down. You’ll want to squeeze in that next section, and then the next, and then the next . . .