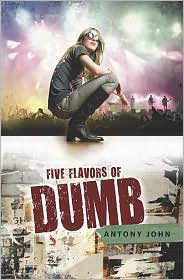 Piper is a smart teenager, but unpopular, and when she tells kids in the band Dumb how they should be marketing themselves, they challenge her to be their manager for a month to see if she can do any better. Oh yeah, and Piper is deaf. Or almost deaf. She does have some hearing aids, but cranked on high she can't hear much of anything.

Managing the new band on a dare, Piper struggles with not knowing if they sound good and not knowing much about music at all. Her lack of knowledge even includes Nirvana and Jimi Hendrix (sacrilege!), but living in Seattle she and the band take pilgrimages to discover more about these influential artists.

Piper also has other issues to deal with, like the loss of a friend, the flirting from another friend, and the stupidity of her father who refused to learn sign language to communicate with her. Oh, young adult novels with their idiotic, cartoonish parents.

Five Flavors of Dumb by Antony John is a fun book, but it's missing something. I didn't hate it. It was just meh. In Piper's musical journey I learned a few things about Hendrix that I didn't know, but I didn't quite see the impact of the band researching Cobain and Hendrix. Great artists, yes, but then what? I think it was supposed to show that Piper and the band gained more musical knowledge and they didn't sell out, but I don't think it quite came together.

I also wanted more about Piper and her deafness, but then if I think about it there was a lot of that, but I just wanted more? I can't put my finger on it, but something is missing that would make this a fabulous read.

Maybe it just comes together too perfectly? Everything that was going sour in Piper's life magically ties into a pretty bow in the end. Maybe the ease of that bow bothered me?

I can't quite figure it out, but Piper, her rude father, her popular younger brother, the teens in the band, and Piper's physical and internal struggles just weren't enough. It's good, but not great.