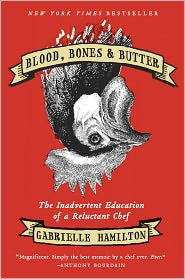 Gabrielle Hamilton’s food memoir Blood, Bones & Butter is a bit of a sleeper. It starts with pleasant and wholesome childhood memories in a big old house on plenty of acreage, parked under mother’s chin listening to her talk, watching her prepare huge feasts.

Then Whammo! It’s girls gone wild. Age deception, booze, drugs, alternative schooling, jetting off to New York City to live with her sister and steal dinero from the bar where she works. Wandering down the East Coast to hone hippie sensibilities, still keeping a toe in the food industry. Off to Michigan to study writing among peers she doesn’t really connect with and cater events among co-workers with whom she does.

There is a definite wait-what? moment.

This memoir is pretty uneven. The writing, specifically the moments when she is really talking food, is not only super visual, but almost taste-able. But some of the life story is a little dry documentary. Some of the best parts are set in Italy, but it goes on too long and is repetitive.

There are some wicked scenes in this book, including a lobster massacre at a summer camp so inexcusable — picture the poor little creatures unable to breathe, crawling up each others backs to escape — that Hamilton fled the premises leaving a bucket of KFC as a token of her discontent. Baby’s first chicken kill-pluck-cook, however, is the beautiful flavor of gore.

When one decides to write a memoir, she can include, smudge, or ignore any facet of her life. In the case of this one, the smudged and ignored parts are a bit distracting. Our hero paints her mother, first, as this wonderfully exotic and worldly woman who spent hours in the kitchen and tag-teamed with her husband a massive lamb feast every summer. Then her parents split up. Later in the story she is on her way to meet her mother for the first time in 20 years. There is a vague resolution at the end of the trip. But without even a bit of an idea of why they were estranged, it lacks impact.

Also: At one point Hamilton enters into a long term relationship with a woman she meets while getting her MFA in Michigan. Hamilton cheats on her with Michele, the Italian green card-needer she eventually marries and makes puppies with. Their actual relationship is unclear — they do it, they don’t live together, they travel to Italy together every year, they don’t communicate, she seems to like the idea of this family thing. Not really the stuff of pop ballads.

During one of the best parts of the story, Hamilton is opening her restaurant Prune in the morning and there is an overwhelming smell of human feces, which is coming from outside the back door. Later she looks out and sees a dead rat — newly dead and even still breathing, she thinks — until it falls down a step and busts open revealing a slew of maggots.

The person who wrote this scene is probably the same kind of person who knows there are huge omissions in her story, shrugged, and said “Eff ’em.” Which is also kind of awesome.