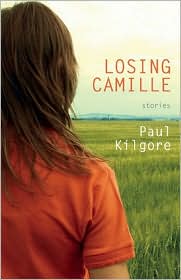 Today we’re featuring Paul Kilgore who is either the sixth or seventh author from Duluth we’ve featured. What is in that water up there? Paul is a lawyer whose fiction, nonfiction, and poetry have appeared in numerous publications, including Prairie Schooner. He has been a columnist for the St. Paul Pioneer Press and his work has appeared on Garrison Keillor’s A Prairie Home Companion. He is a past winner of Minnesota Monthly’s Tamarack Award for Short Fiction. His short story collection Losing Camille is nominated for an MN Book Award in fiction.

Have you ever had a crush on a fictional character? Who?
Few males can fail to be stirred by Augie March watching Esther Fenchel stoop for a tennis ball and experiencing “a push of love and worship in my bowels at the curve of her hips, and triumphant maiden shape behind, and soft, protected secret.” But if we're talking crush, the character I keep coming back to is Joanna from Elizabeth Parsons's “The Nightingales Sing”, one of the most humane and affirming stories in our literature.

If your favorite author came to Minnesota, who would it be and what bar would you take him/her to?
Fitzgerald is a favorite, but he was already from Minnesota and, in any event, bringing him to a bar might not be a good idea. Updike's a favorite, too, but it's hard to imagine him sitting in a bar. Mark Twain would be my choice, and the perfect frontier bar would have been the pre-demolition Kozy Korner Inn in Fairbanks (Minnesota).

What was your first favorite book?
The Adventures of Tom Sawyer. Through a thousand readings it never disappointed. Still doesn't.

Let’s say Fahrenheit 451 comes to life, which book would you become in order to save it from annihilation?
All books. Between electronic readers and book stores converting to gift shops, all books are in danger of annihilation.

What is one book you haven’t read but want to read before you die?
Like most readers, I have a running list. In the next few months I hope to get to The Master and Margarita, The Education of Henry Adams, and Ian Frazier's Travels in Siberia ? not to mention Alan Levy's biography of Rube Waddell, baseballs' most eccentric player.