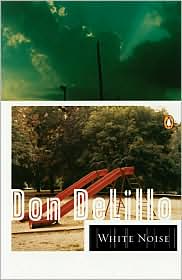 More often than not, I miss the forest for the trees. When I talk about Don Delillo’s White Noise, I want to talk about hilarious dialogue, a scene involving a near-miss plane crash, and a pop culture curious professor Murray Jay Siskind, who has a concentration in Elvis and wins the award for supporting character.

I want to talk about how some writers have this ability to riff with words in a way that just seems willy nilly but probably is not. They can toss down paragraph after paragraph of such cleverness that if you listen closely, you can practically hear Delillo cackling through the clacking on his keyboard. It is this gust of creative freedom, fresh air and wintergreen breath, that looks like a tampon commercial: Hair bouncing and blowing during an exhilarating horseback ride, a game of touch football on a fall day, wearing white pants and still being able to dance all night at the discotheque. That is the way Delillo writes.

Jack Gladney is a professor who has invented a program called Hitler Studies at the Midwest university where he teaches and takes long walks in his professorial cloak and dark sunglasses. He is on his fifth marriage, this time to Babette, who seems like a human hot dish, all warm and comforting-like. They live with a blend of kids from various other entanglements: A teen-aged son, seemingly a budding philosophy major; A pre-teen daughter who reads medical reference books for sport; another daughter who enjoys burnt toast, and a creepy young son who brings a level of pleasure to Jack and Babette’s life that both deem undefinable.

This is a Plot-Lite story, a novel that favors incidents over progression and growth and tangible conflict. The main moment happens in a middle section of the book, when? an “airborne toxic event” sends the townspeople scurrying for safety from it’s ominous ramifications. Life resumes after that, though, although Jack has been tainted by exposure to the cloud and Babette is acting strangely, staring out windows, her over-worn sweat suit gaining its own muscle memory.

The aforementioned Murray Jay Siskall is Jack’s colleague who is constantly studying society and conducting man-on-the-street interviews. He provides a conversational backboard for Jack to lob ideas off of, Murray returning with quips and questions and pushing conversations in unusual directions.

“Your wife’s hair is a living wonder,” Murray said.
“Yes, it is,” I said.
“She has important hair.”
“I think I know what you mean.”
“I hope you appreciate that woman.”
“Absolutely.”
“Because a woman like that doesn’t just happen.”
“I know it.”
“She must be good with children. More than that, I’ll bet she’s great to have around in a family tragedy. She’d be the type to take control, show strength and affirmation.”

In a scene that feels like something starring Leslie Nielson, Jack is at the airport waiting for another daughter to arrive. He witnesses a slew of woozy passengers filing off a plane. A man tells a story of how there was almost a crash. How three of the four engines failed and they plunged out of the sky.

A flight attendant pinned to the bulkhead reading a disaster manual.
The pilot screams “We’re a silver gleaming death machine!”
Passengers crawl into the fetal position.
Another pilot tells the story into the black box, ending it with “I love you, Lance.”

This might be my favorite scene out of any book ever. It has that same zippy flavor found in conversations with Murray and it’s pure hilarity. Delillo does this sort of thing well. Admittedly, his humor doesn’t come with different dialects, so plenty of the characters sound like other character’s own inner monologue. But for the most part, this book is a pleasure to read.