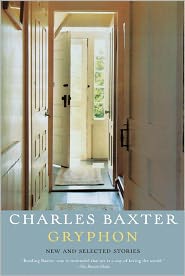 I believe that Charles Baxter is one of the best writers on Earth. If I had to pick which one should sit at the head of the table during a gathering of my top ten, I’d probably just say “Screw it” and make him arm wrestle Haruki Murakami for honors. Let the loser carve the bird.

I also believe that Charles Baxter is the trickiest writer to write about. I decided this even before he wrote a state-of-the-reviewers address about “owl criticism,” in which a book is critiqued like this:
“This book has an owl in it and I don’t like owls.”

This designation isn’t just for the rookies.

Baxter is tricky because I understand thematically what he does. I see the way he rips a slice out of a normal life and hip-checks it to just an inch from absurd, but toeing the line and swinging its arms to balance at the line where realism ends. I see that he is a clean writer. I see that he writes characters with layers that aren’t even hinted at, and that if you hung out with them a bit longer you might be surprised by the contents of a refrigerator or the smell their socks have trapped at the end of the day. He pits squares versus circles and tries to make them communicate.

But I’m not sure exactly how what he does results in the chemical response it leads to. Specifically: Why do I always forget what he wrote about and only remember that it was brilliant?

Charles Baxter’s writing has this way of absorbing into your skin. Setting up shop. Making a memory where you’re like: Wait. Was that me making out with my boyfriend on a football field that one night, or is that something that happens in one of Charles Baxter’s novels? And even when I can pinpoint it, say, “Oh, that was Feast of Love, not the summer of ’94,” I cannot attribute any more plot points to the novel that I would actually call one of my favorites of all time.

I’ve never found this to not be the case with Charles Baxter, and it rings just as true in Gryphon: New and Selected Stories, a mix of 23 stories. Not a dud in a bunch, but flipping through the collection I finished yesterday I’m all “Oh! Yes! The one about the young couple living in what seems to be Dinkytown. The warning from the exgirlfriend. The homeless man who grants three wishes! I love that story!”

Faves include “Harmony of the World,” in which a good musician who is not quite good enough works accompanies a singer who is good, but not quite good enough and it all ends in a very Edgar Allan Poe-ian crescendo, minus the beating heart in the wall; “Surprised by Joy,” in which a couple suffers when the pace of their grief isn’t in step; “Snow,” about a forever student drunk drives to help out his ex-fiance; the aforementioned “Kiss Away,”; and “Royal Blue,” which I loved so much that I can’t remember a lick of it; “The Old Murderer,” is the beginning of a friendly relationship between neighbors with dueling demons; “The Winner,” in which a freelance writer is thrown into “The Lifestyles of the Rich and Famous.”