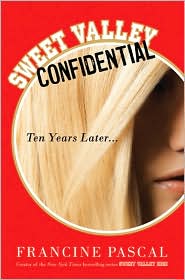 When Sweet Valley Confidential: Ten Years Later arrived on my doorstep Monday afternoon, I was more than a little excited. It was the first time in my, er 26-year Sweet Valley career that I didn’t have to trudge up to Waldenbooks in the Northtown Mall with the hopes that the latest book was in stock.

Just to be clear, I haven’t been reading Sweet Valley High books for the last two decades. In fact, I don’t think I’ve read one since about 1989. That doesn’t mean I stopped collecting them. I stopped at volume 100. It seemed like a nice, round number. Plus, my money was better spent on beer.

So the moment the book landed in my hot little hands, I flopped into the La-Z-Grrl and dug in. It was very 1985 here at Supergenius HQ in the best way I remember. I was consumed and grinned the entire time I read the book.

This, sadly, does not mean it’s a good. It’s not. The writing is awful and the story is predictable. It’s like Francine Pascal couldn’t decide who her audience was: A new generation of would-be Sweet Valley lovers or the 30something women who grew up on the sunny, California twins. The writing and unsophisticated story seems to point to the former, but the use of the word fuck and the fact that we learn Elizabeth cries before she has an orgasm points to the latter.

The way Pascal chose to tell this story is puzzling. It’s told in passages that alternate between the present day and flashbacks that date back to elementary school. But what’s odd is that the stuff that’s happening “now” is told in third person past tense. The flashbacks are first person present tense. It’s weird.

The “now” finds the twenty-seven-year-old twins locked in an Epic Battle. A battle so epic that they haven’t spoken in eight months. Jessica is living in Sweet Valley as an up and comer PR/marketing type for a green cosmetics company and Elizabeth has fled to the Upper Westside of Manhattan where she is writing for an online magazine that dubs itself a sort of Zagat’s Guide for off-Broadway plays.

The book basically unfolds the events that lead to this rift and the tension hangs on whether or not the twins can find their way back to each other.

Now here’s is where I start to SPOIL some shit. If you don’t want to know (or haven’t already guessed) what has happend to your favorite Sweet Valleians, stop right here. But two more sentences before you stop. Frankly, the story here is shit. If you’ve ever read any Sweet Valley High book at all, you can figure out what happens. Okay, now stop because the spoilers are about to begin.

Jessica and Elizabeth are fighting because Jessica and Todd Wilkins have fallen in love. In such deep, passionate, undeniable love that they must be together even if it hurts ol’ Lizzie. In fact, they’re getting married and much of the drama hinges on whether Elizabeth will attend the wedding.

The first OMGWTF!!!1!!! that I didn’t see coming was the big bother Stevie. Sure he’s a big-wig lawyer following in daddy’s footsteps, and he married HS-sweetie Cara Walke, but through most of the book the twins both talk about what a shitty serial philanderer he is. But he’s not, well not really. Turns out he’s gay and in love with Aaron Dallas (who I couldn’t really remember). I know, right?

The second? Winston Egbert is dead.

Also, Elizabeth’s new BFF is Bruce Patman who turns nice after his parents die in a car crash. Also, he’s in love with her. And Enid, she’s an ultra-conservative gynecologist dating A.J. Morgan who works at a mall shoe store.

Lila married Ken Matthews who is an NFL star but they are getting divorced. Nobody goes to the Dairi Burger and there is nary a mention of Dana Larson or The Droids.

There is a scene, pretty early in the book where the whole SVH gang gets together at Lila’s house for some sort of shindig. The scene reads like a roll call of the high schoolers who starred in the original series who all married each other. As I was reading it, I thought How depressing. Not a single one of them got the fuck out of Sweet Valley. Because we all know those people who married their high school sweetheart, still live in the same town they grew up in, and never evolved at all.

That’s a perfect metaphor for Sweet Valley Confidential it hasn’t evolved at all.