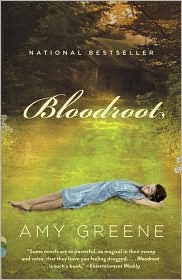 “A good voice gets you a long way,” my friend, Steve Brezenoff once said. Though I would never admit this to his face, those are some pretty wise words. A good voice does get you a very long way, which is why I enjoyed Amy Greene’s Bloodroot so much.

Each voice in this novel, and there are six of them, was so genuine and true to the character that I was pulled along through this story about Tennessee hill folk, madness, and magic even though some of the storytelling kind of drove me bonkers.

The book opens with Byrdie, an old woman from Chickweed Holler telling the reader about her childhood and early adulthood growing up in the hills of Appalachia surrounded by a group of women who possess mystical powers. At one point there’s a curse placed on the family. Eventually Byrdie falls in love and moves to Bloodroot Mountain where life does not get much easier. She loses five of her children and ends up raising her bewitching grandaughter, Myra.

Blackhaired, blue-eyed Myra is the sun which all the other characters revolve around. She’s a smart, rebellious girl who falls in love with a dangerous, handsome man named John Odom. I’m sure you can figure out where things go from here and it’s nowhere good.

For most of the book, Myra’s story is told through the voices of her grandmother, a neighbor boy, and then her twin children, Laura and Johnny. These characters do a good job of moving her story forward. We learn about life on the mountain, Myra’s tumultuous relationship with Odom, and her descent into depression that ends with the twins being taken from her and placed into foster care, and how their lives crumble after that.

When we finally hear from Myra, it’s a bit of a let down. As a reader I found myself skimming through the first chunk of her chapters — the bits about growing up on Bloodroot Mountain and falling for John Odom — because it felt repetitive. I already knew all of this, and hearing it from Myra first hand didn’t shine any new light on the story. She does reveal some new stuff, but after awhile it falls into coincidence and cliche. Almost like the author was trying too hard to tie things together.

And yet despite all this, I still enjoyed reading the novel. The sections told from Laura’s and Johnny’s point of view are simply fabulous. Their voices and their stories are fresh and moving, and as a reader I was emotionally invested in what happened to them, much more so than their mother. In fact, reading their story is rewarding enough to make up for the rehashed bits, the strained metaphor involving a horse, and the convenient ending.