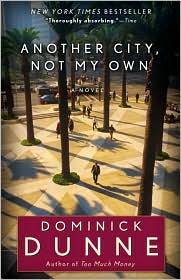 Here is the precise formula my new bestie used to write his late-1990s Anti-Ode to OJ Simpson, the novel-ish memoir Another City Not My Own:

It’s all very self-referential, a snake swallowing it’s own tail (tale?), and name droppy. In the arthritic claw of another writer, it would be satire. A caricature. A story about an insufferable writer who needs to keep reminding people that Frank Sinatra hates him and that the Bloomingdale family has forgiven him for turning them into characters in another of his novels. In Dunne’s hands, it is exactly who he is: A starfucker.

Both Dunne and the character he built in his own likeness have a shared desire to see OJ in stripes. Too many high-power people getting away with too many crimes. Both Dunne and Gus have a daughter who was strangled to death by an exboyfriend who ended up serving just a two-year sentence which led to a furious pursuit of justice — particularly in cases where someone famous confuses a jury with a Heisman Trophy smile.

Both Dunne and Gus make plenty of enemies along the way. When the story opens, Gus is dead. A deviation from his own story — and a deviation that didn’t stick. In Dunne’s final novel Too Much Money, which was released in 2009 after his death, Gus is alive! It’s a miracle!

There is this particularly insufferable moment when he is with his ailing ex-wife Peach. Their son is missing. He went on a hiking trip five days earlier and hasn’t returned. He doesn’t have food or water with him. The remaining members of the Dunne-er-Bailey family have gathered at Peach’s house, but they haven’t told her what is going on in the main rooms of the house. The phone calls, the food, the traffic. Finally Gus sits down with her and instead of just blurting the bad news, he reels off a list of names of people he’s seen recently and meals he has enjoyed. Marcia Clark’s clothing and a memory about Zsa Zsa Gabor’s funeral. Finally he tells her, barely starting a new sentence to convey the information “Zander is missing.” Then it’s back to the talk-talk-talk and he closes with a memory of an infamous party they threw in the 1960s. She smiles.

Despite this, despite all of this repetition and name dropping and hackneyed plot points and me-me-me-ism, I still am charmed by the old coot — both Gus and Dunne. I think it’s because I’m getting to know him so well.