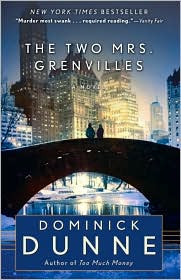 I love Dominick Dunne, whom I affectionately refer to as “that old coot” in my head. There are the obvious reasons for loving him: The fan fiction about what it would have been like to be a living, breathing light socket during a Thanksgiving dinner that included Dominick and his sister-in-law Joan Didion; The great mythology that is the movie “Poltregeist,” which featured his daughter Dominique, who had been murdered before the movie landed in theaters. She being part of a cursed cast in which plenty of the cast expired from unnatural causes.

Dunne, himself, was an interesting case. A controversial figure who lived more than one lifetime. And not “controversial” in that stately way, a powerful figure bucking authority. More like a weasel-y figure wrapped in round glasses armed with a poison pen. If it landed in his ear, it was fit for a page. Which is how The Two Mrs. Grenvilles came to be. A combination of gossip and conversations about Ann Woodword that he masked with mesh.

This is what Dominick Dunne not only does best, but what he only does. And it is delicious.

In the story, a writer stupidly named Basil Plant stumbles upon Ann Grenville long after she has been ejected from the gossip columns. She is traveling on a cruise ship and concedes to tell Basil Plant the story of the night she shot her husband, her rise up the social ranks and immediate plummet in the aftermath — even though she wasn’t found guilty. A case that was called the “shooting of the century” by Time Magazine. She claimed to think she was shooting a prowler, a story the elder Mrs. Grenville coaxed along preferring it to the story she suspected, which would keep the Grenville name in gossip columns forever.

This book is sordid, filled with unrepentant assholedness — drunken behavior, infidelity, bad manners, the younger Mrs. Grenville damn-near counting dollar bills at the dinner table. When she first meets William Grenville, Junior, and her clothes fall off before she even realizes that his family lives in a castle overlooking Central Park, she thinks back on the night and wonders if maybe it wasn’t a little early to sit on his face.

I love picturing Dominick Dunne, celibate for the last 20-or-so years of his life, rumored to be so far in the closet that he’d have to climb past junior high yearbooks and 50-year-old sweaters to reach the doorknob, writing that line and cackling to himself.

I can’t wait to spend the rest of 2011 reading everything he wrote.