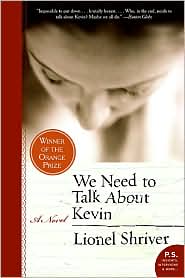 Consider a scab. Picture the raw pink steak-ish part beneath it. Now go down another couple of layers. This is where Lionel Shriver went to write the super-gripping, super honest novel We Need to Talk About Kevin.

This is set in the aftermath of a teen massacre. Eva Khatchadourian is an entrepreneur, a world-ophile, deeply in love with her husband Franklin, independently wealthy, and the mother of a Kevin Khatchadourian, the barely-not legal who took out seven of his classmates in a well-executed execution.

He’s locked up. She’s still running into parents of victims at the grocery store and trying to stay steady when she tells people her infamous last name. A couple times a week she pens a letter to Franklin, with whom she is estranged, and the story unfolds in these journal-style waxing. She rehashes their past and admits to the daily struggles: The time some anonymous faces soiled her porch with dark red paint; The woman who smashed every egg in the carton Eva had left in her unattended grocery cart. Visiting their snarky asshole of a son in kiddie prison.

Eva is hardly a candidate for a STFU Parents post. She’s a reluctant incubator who agrees to drink the baby batter with the idea of collecting another person to love. To mixing life up from its predictable forward trajectory. To re-celebrate things like first words and first steps. But before he is even born, and especially after he’s born, she resents this change in lifestyle and this silent dullard who seemingly likes nothing.

By the time Kevin is school-aged, he has revealed a host of anti-social behaviors: Chucking rocks off bridges at passing cars, convincing a classmate with eczema to itch herself into a collection of blood flecks, fiddling with a neighbor’s bike and causing an accident.

Where Eva sees pure evil, Franklin is pantomiming an episode of “Happy Days”: Sports, staged battle re-enactments, a hardy boys-will-be-boys chuckle. This, obviously, is making things a little stressy on the home front.

And just when it looks like Franklin is obviously the biggest freakin’ idiot in the world to not notice that young Kevin is a sociopath, Shriver does a wordy strip tease and slowly reveals Eva as a bit of a pretentious dick. This leads the reader to a nugget of doubt:

Maybe Eva is a little loco and things aren’t as bad as she thinks.

At the same time, post-killing Eva is a metaphorical cutter, whose guilt over what has happened and how much of the burden of blame falls on her is what drives her to continue visiting Kevin and continue living in a place where she can’t dissolve into anonymity.

This story is unique in both its complicated dueling leads — Eva and Kevin — and its not-so rosy portrayal of motherhood. There is a depth of honesty to Eva’s pattern of thought regarding to breed or not to breed. Franklin’s foray into the land of make believe was harder to swallow. The gruesome part of the plot seemed less sharp than all that proceeded it, but the development of the characters was the best kind of wrenching gut punch.