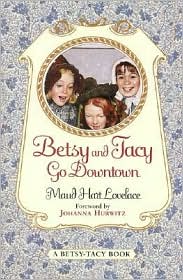 Betsy and Tacy are really growing on me. As I previously wrote, I did not like the first couple Betsy-Tacy books, but they started getting better. They keep getting better.

In Betsy and Tacy Go Downtown, Betsy, Tacy, and Tib are twelve and are able to go downtown by themselves. It's starting to get fun discovering things with them, like the first time they see a horseless carriage (a car), the fun they have seeing the play “Uncle Tom's Cabin,” Betsy's exploration of literature in the town library, and their friendship with an ex-actress.

All of these things sound simple, and some of them are, but there is more depth hidden throughout the pages that I hope will continue to be explored.

For one, Betsy learns of her uncle, her mother's brother, who the family hasn't seen for years because he had a falling out with his mother and her new husband. This story isn't fleshed out, but I'm hoping it's foreshadowing for more we will learn later. What sort of falling out did he have? What did his mother do? What did he do? This is the first book in the Betsy-Tacy series that hints that things aren't all rainbows and roses.

Another hint at some imperfection is the way the women treat Mrs. Poppy, the ex-actress the girls befriend. The women in Deep Valley ignore Mrs. Poppy because she comes from the big city (Minneapolis) and she has a more elegant lifestyle than the rest of them. The social customs of this era fascinate me and getting more of a picture of that in this book was great because we want to see some of these imperfections. It makes them more real and relatable.

One thing that did throw me off was the discussion of “Uncle Tom's Cabin” and actors in black face. We know this is extremely disrespectful, but this is a glimpse at the beginning of the 20th century and actors in black face would’ve been the norm. I'm glad they didn't edit this like they recently edited Huck Finn. We need these honest glimpses into our not-so-perfect past and this could be a great discussion point to have with kids as they read through these books.

Now that Betsy and Tacy have won me over, I can honestly say I wish I would’ve known about these books when I was little. They would’ve been yearly reading for me just like the Little House on the Prairie books were.