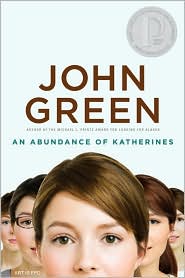 Colin Singleton is a recently-graduated high schooler/former child prodigy who has just been dumped by Katherine. The nineteenth Katherine he has dated. He calls her K-19. Hasan is Colin’s Muslim best friend who convinces him that the only cure for his depression is a road trip.

Adding to Colin’s depression is that fact that while he was a child prodigy he never become a genius (he explains the difference in great, and entertaining detail in the book). He’s determined to have his Eureka! moment and discover something that will cement his intelligence in the annals of history for all time.

So, the two embark on a road trip from Chicago and make it as far as Gutshot, Tennessee. There they are waylaid my Lindsey Lee Wells the tour guide for the grave of the Archduke Franz Ferdinand that happens to reside in Gutshot and end up employed by Lindsey’s mother, Hollis.

Hasan, Colin, and Lindsey’s job is to interview the elderly residents of Gutshot about their lives in the tiny town. Even though they’re outsiders Colin and Hasan are quickly welcomed into Lindsey’s little clique of friends, including her boyfriend, The Other Colin. Lots of teen hijinks ensue — drinking, infidelity, trips to Hardees, and wild pig hunting.

Throughout the hijinks Colin is working on a Theorem for the Dumped, whereby he thinks you can graph the outcome of a relationship between two people by putting numbers on a bunch of random factors (attractiveness, popularity). Specifically he thinks with this theorem he can determine who will be the dumper and who will be the dumpee and become famous all at the same time. Colin does get his Eureka! moment. In fact, he has a few of them and each one is as rewarding to the reader as it is to Colin.

It’s all completely charming and totally entertaining. An Abundance of Katherines is one of those books that’s hard to talk about. It’s not the most original story ever told, but it is quite funny. The writing isn’t earth-shatteringly beautiful, but it is smart. The whole thing is just very nice and good, which makes for a good time reading but a hard time reviewing.