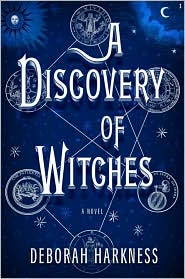 A Discovery of Witches by Deborah Harkness was filled with everything I love – witches, vampires, daemons, and a mystery involving manuscripts, magic, and history. Sold!

Or at least I thought I was sold.

Meet Diana Bishop, a witch denying her powers ever since her parents were murdered when she was young. Instead of diving into witchcraft she turned to a life of education and became a professor. On sabbatical to research alchemy, she accidentally recovers a manuscript, Ashmole 782, that sighs when she touches it and has text dancing across its pages.

The manuscript is where Diana's troubles begin. Witches, vampires, and daemons, believing the manuscript reveals how they came to be, have been trying to recover it for centuries. Diana soon finds herself being watched and threatened by all sorts of beings, but she wants nothing to do with the manuscript.

This all sounds fabulous, and it really is, this underlying story is great. What turned me off was the entrance of a domineering, controlling vampire Diana falls in love with.

The description on the book jacket says the novel is “equal parts history and magic, romance and suspense.” I wouldn't say these were equal since the romance filled up many of these pages, but I would've been fine with that had it actually felt like romance.

Enter Matthew Clairmont, a vampire masquerading as a professor where Diana is conducting her research. Matthew is just as interested in Ashmole 782 as all the other beings, but he soon becomes more interested in Diana, which is a no-no in their world. Vampires, witches, and daemons are not supposed to mix. It makes us humans suspicious and worried.

This doesn't seem to bother Matthew and he soon starts stalking Diana's every move, and even breaks into her apartment to find out more about the manuscript. At first his stalking annoys Diana, as it should, but soon she starts to enjoy his company. Sure, I'll call stalking “company,” because that's pretty much what it's turned into here.

Matthew claims his stalking is really him protecting her. It’s funny, we're told Diana is a smart, strong-willed, independent woman, but when Matthew tells her that, in love, vampires are extremely possessive, she says something stupid about how she would welcome some protection.

Their romance (and I use that word lightly) is just Matthew telling Diana what to do and if she disobeys him he scolds her like a father to a child. At times he also overpowers her, like once when he holds her tightly against her will and she attempts to escape by using tips she learned in a self-defense class. Sounds like romance to me!

Am I really supposed to believe that possessiveness is sexy? It's not.

Besides possessiveness, Matthew continually hides things from Diana or lies to her. When she finds out about the secrets and lies, one of them being that he's secretly drugged her with his vampire blood (just a drop on our lips has the same effect as a roofie), for some reason her love for him gets stronger.

I just didn't buy any of this. It got so bad that when a witch steals Diana from Matthew and tries to turn her against him, I got super excited. Alas, nothing will stop her love for him.

People who love this book will probably tell me that he was just protecting her and doing all of this for her own good. If you're going to tell me that, stop right there. That just sounds like the crap abusive men say.

The underlying story, what the novel started out to be, would've been a fabulous story. The romance would’ve also been great had it not been like this. At times the interesting parts of the story involving the manuscript, all the beings, and the history would make me forget the romance, but then something new would pop up and annoy me. I couldn't get past it. I'll be skipping the future books that will complete this trilogy.