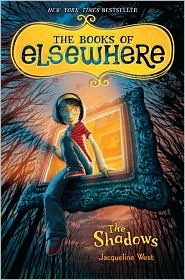 Jacqueline West has held a lot of jobs. She’s worked as a church soloist, Montessori preschool teacher, dinner theatre actress, voice instructor, arts writer, waitress, and high school English teacher. After all that, she finally found a job that suits her best, writing full time in Red Wing with her husband, her dog.

Besides being the author of The Shadows (The Books of Elsewhere, Vol. 1) which has been nominated for a MN Book Award for Young People’s Literature, she’s also the author of the poetry collection Cherma.

And now, onto the her answers to the six questions we always ask.

What book(s) are you currently reading?
I tend to read five or six books at a time, with bookmarked reading material scattered throughout the house so that I can fill every spare minute. Right now, I'm reading Donald Hall's Unpacking the Boxes (I think I love his memoirs even more than his poetry), Sorcery and Cecelia or The Enchanted Chocolate Pot by Patricia C. Wrede and Caroline Stevermer, Schulz and Peanuts: A Biography, by David Michaelis, and Gertrude Stein's The Autobiography of Alice B. Toklas, as well as finally getting started on Remembrance of Things Past.

Have you ever had a crush on a fictional character? Who?
I think my first fictional crush was Peter Pan. I could never understand why Wendy wanted to come back to reality when she could have gone on soaring around Neverland with him. Later, I went through a long Heathcliff/Wuthering Heights phase, when I was an adolescent and thought that doom was far more romantic than happiness. Mercutio always made my heart race a bit. So did Atticus Finch-although Gregory Peck's voice might be partially to blame for that one.

If your favorite author came to Minnesota, who would it be and what bar would you take him/her to?
If I were able to bring Kurt Vonnegut, J.D. Salinger, and Sylvia Plath back to life as well as to Minnesota, it might be especially appropriate to take them to Donnie Dirk's Zombie Den. Then I would probably do just what I've done when meeting other authors I admire: beam at them in mute adoration. But I would buy all of their Corpse Reviver cocktails (and in Kurt's case, a whole carton of Pall Malls) if they would just let me sit at the edge of their booth and listen to the three of them talk.

What was your first favorite book?
Little Women was the first novel I read on my own. I was six, and I think I picked it off of the living room shelf just because it was so dauntingly thick. Our copy came from a garage sale; '25?' was written in black marker on its cover, and it was bound in worn red cloth, which eventually bore a discolored pink streak where my piano teacher's basset hound dragged its jowls across the book while trying to direct my attention away from the story and back to the ear-scratching. I read that copy of Little Women again and again. Sometimes I would get to the final page and turn straight back to the beginning. I reread it until we had to repair the binding with electrical tape, and all its corners felt like velvet.

Let’s say Fahrenheit 451 comes to life, which book would you become in order to save it from annihilation?
It might be easiest for me to pick something like Jane Eyre (which I already have half-memorized, thanks to that Victorian-obsessed adolescence), but if I had to embody one book in a Fahrenheit 451 sort of world, I would probably choose Vonnegut's The Sirens of Titan.

What is one book you haven’t read but want to read before you die?
One? I'm currently plodding my way through that “1,001 Books to Read before You Die” list, because I'm a sucker for lists of all kinds. If I had to pick just one, now that I've started it, I would really like to finish Remembrance of Things Past. I'm on page 18. Just 2,000 pages to go.