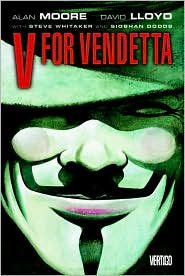 After abandoning Watchmen and muddling through V for Vendetta I’ve come to the conclusion that Alan Moore is just not for me. I feel a little bad about this. Many people whose opinion I respect hold him up as one of the greats and while I believe they’re right, it doesn’t mean that I enjoy Moore’s work.

V for Vendetta is one of those dystopian future type tales ala 1984 or Brave New World. Only this future is 1997 (which was decade away when Moore first wrote this as a series of comics), and as is to be expected things aren’t going well. After a nuclear war England has fallen into the hands of a fascist regime that has killed off homosexuals and anyone of any non-white ethnicity. English citizens are closely monitored with cameras everywhere, and fed a steady line of propaganda by both Fate, the government’s computer system and the Church, which is also controlled by the government.

Enter V, a superheroesque vigilante in a Guy Fawkes mask. Appropriately enough on Guy Fawkes day 1997, V swoops in and saves a sixteen-year-old would-be prostitute, Evey, from gang rape and eventual murder at the hands of the Fingermen (we’d call them policemen). After saving Evey, V blows up the abandoned House of Parliament and secrets Every away to his home, The Shadow Gallery.

This is only the first act in V’s plan to overthrow the government, wake up the brainwashed English citizens, and teach Evey the ways of anarchy and vengeance. Along the way we learn that V is a survivor of the concentration camps. Not only did he survive the camp, he survived the secret biological tests they conducted on him while imprisoned. At the camp he was only known by the room number he occupied, five, or V.

The book follows V’s plot to overthrow the government and exact revenge on his concentration camp tormentors, all of who have risen to high posts in the fascist regime.

Part of my ambivalence toward V for Vendetta is the fault of the art. In the paperback version that I read, the art was small and kind of muddy. I had a hard time discerning characters — especially the men in the government– which made it hard to keep track of who was doing what to whom and when. In a traditional novel, I’d have attribution to help guide me. Since I couldn’t tell who was who it was really hard to build up any emotion toward any of the characters and I’m afraid this frustration leaked over onto the rest of the story.

The other part of my ambivalence might just be that I’m over dystopian future books. They all have the same oppressively depressing vision of the future with the faintest glimmers of hope. It’s a story that has been told a thousand times in virtually the same way.

But, like I said, I do have a vague sense of admiration of V for Vendetta, but most it came not from the book, but from reading about the book. Because I was so frustrated after finishing, I turned to the Internet to see if I could find something new. The more I read about V for Vendetta the more I liked it. Alan Moore’s pretty clever which is admirable. I picked up on a lot of his cleverness in the reading, but it wasn’t enough to make me care or enjoy the book.