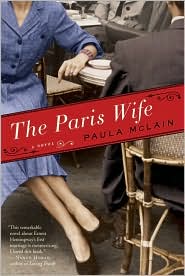 How do you go about writing a character as large as Ernest Hemingway? If you are Paula McLain, you write him as a romantic from the view of his first wife, Hadley. Well, at first he’s a romantic. Those who know the story know it doesn’t turn out well.

In her first novel, The Paris Wife, McLain zeroes in on the backdrop of Paris in the 1920’s. This was a colorful time for ex-pat writers and artists living on the cheap after the war. Hemingway readers know this era from “A Moveable Feast”. McLain fictionalizes such characters as Gertrude Stein, the Fitzgeralds, Ezra Pound and the true life people “The Sun Also Rises” is based on.

It’s clear McClain has done her research. The dialogue between Ernest and Hadley seems cribbed right from some of Hemingway’s short stories like “Hills Like White Elephants” – direct and to the point. One bedroom scene is right out of the novel Garden of Eden – Hadley tries on Ernest’s hat and he declares they look so much alike they could be brothers.

McClain does a good job of juggling the facts and the may-be-truths of Hadley and Ernest’s marriage. She touches on their tragic past family histories, their shared friendships and tendency to drown their sorrows in alcohol. I don’t know about you, but I always like to read about artists drinking loads of absinthe in Paris.

McLain describes the particular fashions (Chanel, bobs, shorter skirts) of the moment well without going over the top. The voice of Hemingway, Hadley, and their contemporaries are positively appropriate, grand and lovely, old sport, for the Roaring Twenties.

My previous ideas about Hadley, based on what I don’t remember, maybe A Moveable Feast, a Hemingway biography, and another historical novel set around their time in Paris, were that she was a stick in the mud who lost all of Ernest’s manuscripts on a train. McLain writes her as more sympathetic, very aware of her role as the steadfast wife to the stormy artistic genius and more than okay with that. I got caught up in the love story – and it’s quite a love story, with triangles and a child and parties and travels all over the world and heartbreak.

Not a hard read, and not a work of art, but a satisfying and entertaining historical novel especially for those with a passing interest in Hemingway. I’m currently hunting for a good biography of him, if you have any suggestions let me know. This novel is also a perfect companion piece to A Moveable Feast, The Sun Also Rises, with a beret, some crusty bread and Pernod.