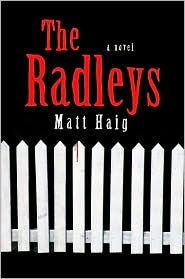 The Radleys by Matt Haig was the fun, carefree read I needed. Sure, it dives into some issues of suburban hell and isolation, but overall The Radleys is a fun, witty, dark comedy full of vampire goodness.

The Radleys are a family of vampires, though not everyone in the family knows it. The two teenage Radleys, Rowen and Clara, have been kept in the dark (pun not intended) about being vampires because their parents are abstainers. Following The Abstainer's Handbook, a guide for vampires on how to abstain from the blood-sucking lifestyle, the Radleys have raised their children as normal suburban kids, except for the fact that they douse themselves in sunscreen and garlic makes them gag. Animals also seem scared of them which prompts Clara to turn vegan to win their favor. A vegan vampire. Hilarious.

This vegan teen actually starts the problems for the Radley family. When being attacked, Clara's animalistic instincts click in and she viciously murders (and eats) another teen. What the family does because of this drives the rest of the novel in funny, creepy ways, especially when an uncle, who is not an abstainer, comes back into their lives.

This family is full of secrets and lies, so it's not just Clara's murder they must deal with, but they have to come to grips with secrets and lies that have been flying around (again, pun not intended) since the parents were dating.

I had so much fun reading this book that I secretly wondered what vampire blood would taste like. It sounds like this delicious, life-saving elixir, so where is a bar around here where I can order that?

The characters in this novel are also really appealing. The mother and father are repressed suburban parents with similar characteristics to Kevin Spacey and Annette Bening in “American Beauty.” The wife puts on a happy face and the husband craves something more than his cookie-cutter lifestyle. Add abstaining from your natural instincts to the mix and the desperation for something more is painfully obvious.

The teens are also appealing in that they're like any other teens dealing with bullies at school, thinking their parents are crazy, and having crushes on the unobtainable girl next door. Add the vampire family secret into their strange teenage years, and a simple little murder, and you have the stuff young adult novels are made of.

Although this isn’t a young adult novel, it could be. The Radleys could fit in with any young adult novel and no one would challenge it. But don’t let that deter you. If you like dark comedies, with a little bit of vampire lore, then you’ll love this. It was a great novel and the first I’ve read by Haig, but it won’t be the last.