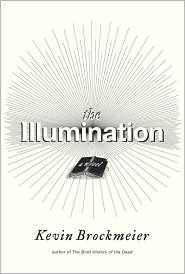 I love the way Kevin Brockmeier tells a story. A master at painting complex, rich characters, Brockmeier makes it look easy. Not that it is easy, far from it, but as a reader I felt like it was a good, simple story and then deep concern for the characters just snuck up on me. His writing is subtle yet packed with regret, anger, love, confusion, and sympathy. I loved The Illumination.

The Illumination could almost be read as a short story collection in that it's more like short vignettes about six different people, although each person has come in contact with the same book and each is experiencing the illumination in different ways.

I should explain what the illumination is, although I really can't since we don't fully know what it is or why it's happening. The illumination is the sci-fi or fantasy element to this novel that is never fully explained, though I don't think it should be since it's not what the story is really about.

People around the world, beginning at the same time around the world, are now able to see the pain in a person's body because it lights up. Bruises on legs shine. Light glows from the chest of someone having a heart attack. Cuts on an arm ooze with blood and bright light. The people of the world start calling this phenomena the illumination.

The story begins with Carol, a woman overcoming a painful divorce, who almost cuts off her thumb and undergoes multiple surgeries for it. In the midst of a drug-induced haze in the hospital she notices light illuminating from her thumb.

During Carol's stay another woman, badly damaged from a car accident, shares her room and her journal. Her journal is a collection of “I love you” notes from her husband who leaves one for her every morning. Thinking her husband died in the car crash, the woman gives the journal to Carol right before she dies. Carol has never felt love like she reads in the journal and her story ends with her contemplating the loss she feels in her life.

Carol's story doesn't continue because in this book we follow the journal. After Carol it goes to Jason, the husband who actually wrote the “I love you” notes, and we follow him as he struggles to cope with his wife's loss in very interesting ways – he becomes a cutter. But right as he's reaching the peak of this odd coping behavior the journal is taken by Chuck, a young boy who seems autistic and who has refused to speak for over a year. Chuck has a deep connection with the journal because he can see it illuminating light. Chuck has been able to see pain in inanimate objects his whole life and has made it his duty to comfort those objects, whether it's his stuffed animals or this journal.

After Chuck the journal moves on to three more people, each tale very interesting in and of itself. The characters are all coping with different losses in different ways. Loss of a loved one, loss of direction, loss of family, loss of love, and loss of home, and I sympathized with each character. I really want longer books written about each of them.

But I don't think that matters all that much to me. Brockmeier is such a lovely writer that even though the simple things that connect characters aren't as strong in the last three, the stories stand by themselves as brilliant, heartbreaking tales of loneliness and loss.