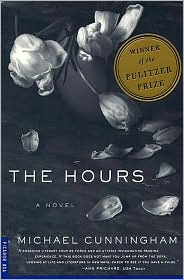 I should begin this review by telling you what I didn't like about Michael Cunningham's The Hours. That way, I can spend the rest of it extolling this book's virtues without you thinking I'm a slavering idiot.

What I didn't like about the book were the typical Cunningham signatures: scenes where nothing is spun endlessly out into something; characters who can be, at times, irritatingly omniscient; AIDS everywhere.

But those flaws are a small price to pay for the experience of reading something as beautiful as The Hours.

Cunningham's novel weaves together the story of three women who, despite being separated by decades, have interlocking stories. Viriginia Woolfe is recuperating as she works on Mrs. Dalloway in a London suburb; Clarissa Vaughan is orchestrating a party for an ill friend in modern-day New York; Laura Brown is slowly suffocating in her role as a suburban housewife in 1950s Los Angeles. Each character is a novella in her own, but more interesting than the plot, to me, were Cunningham's adept handling of themes – flowers are constantly blooming here, as are ruminations on mortality and examples of unusual intimacy ? and his writing.

The Hours is an example of prose at its most lovely and touching. An early scene in a flower shop, “like a temple, solemn in its abundance” where “poppies drift white and apricot on long, hairy stems,” deserved to be re-read at least three times. Clarissa's memories of a summer spent in the throes of a passionate romance ached with lifelike-ness. I came to be gnawed by the same nameless fears Laura felt when her husband went off to work, leaving her alone with a house empty save for a young and impressionable son. It takes an expert hand to produce such evocative writing.