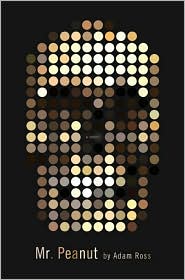 There are writers you like, right: The Egans, the Murakamis, the MacInerneys. Their books are good. You’ll read all of them. You’ll pet the cover and coo. You’ll make a BFD about the fact that you really like these writers.

But then there are your writers. The writers you like because you feel an invisible umbilical cord connecting your brains. Like, their word choices and sentence arrangements are exactly what you dig, and obviously this writer is catering just to you — specifically you. Mostly you wish you had thought of it first.

Instead you can just nod and say, for instance, nicely played, Adam Ross, Mr. Writer behind the novel Mr. Peanut.

Ross’ debut novel is the three-for-the-price-of-one story of husbands and wives, packed with wicked descriptions and some fan fiction. It is the kind of good that doesn’t require a finale, which is phew because the ending is clunky and self-referential and weird and not very satisfying. Less Ahhhhh, and more Uhhhh? But while you’re reading, wowsa. Hold on to your hat, Hannah.

It opens with David, a video game creator who is writing a novel on the sly, and his wife Alice, who is struggling with her weight. College sweethearts who have gone a little out of sync. Within the first 30 pages, she either kills herself or is murdered — either way the weapon is a handful of peanuts she was either force fed or consumed in a suicidal frenzy. Oddly enough, David’s super secret novel is about all the different ways that Alice could die. It is a topic that consumes him while she is alive.

The detective investigating the case are Hastroll, whose own wife has been bedridden for five months with seemingly no explanation. She just stopped getting up. He tries a handful of things to get her vertical, and eventually just begins living his life as a man whose wife refuses to leave bed. He leaves her sandwiches. Sometimes they get naked. He delivers wine. This brief look into their world is funny and well-done, until the punchline-like finale.

The other detective is Sam Shepard, yes THAT Sam Shepard, the doctor who served time for murdering his pregnant wife and was later released. Ross goes fan-fiction on the doctor, recreating the events of his Shepard’s philandering straight through to the death of his wife. It is a curious bit of novella-sized historical fiction within this book that is really good in its own right, and probably pairs well with the did-he or didn’t-he of David … but is still a strange inclusion in the story. It kind of makes the whole novel seem like a re-imagined true crime sandwich.

The biggest thing about this book is Ross’s touch with words. Descriptive, disturbed, dark humored. A trifecta of my favorites. But also touching: There is a scene involving the birth of a doomed child where your stomach will collapse in on itself. He’s not afraid to go absurd, but he has a realist’s uncomfortable touch when it comes to relationships. He’s good enough that I didn’t care that I didn’t dig the ending. It was just nice to see the word choices, the flow, the scenes and conversations. I can’t wait to read more by him.