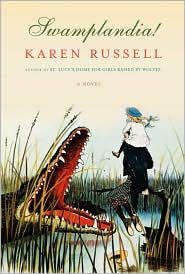 As a writer I’ve never managed to write a decent one. I blame that on Journalism school and inverted pyramid where we were taught to sort of quit rather than bring a story to a nice conclusion.

As a reader I’ve been tough on writers whose endings let me down, like a Russian gymnastics judge I’d be on the look out for the slightest ankle twitch, a bobble of the knee. I wanted the authors I read to stick the landing and if they didn’t I’d deduct major points.

This is a long way to explain that I loved Karen Russell’s Swamplandia! even though the ending was disappointing. But the journey there is so good that not even a dud ending could ruin the magic she creates.

The Bigtree tribe of Swamplandia!, an alligator amusement park in the swamps of Florida, is falling apart. They’ve just lost their wife, mother, and biggest attraction, Hilola Bigtree, to cancer and been forced to put their grandfather, Sawtooth, into a home because of advancing Alzheimer’s. This leaves the Chief economically and emotionally unable to care for his three children: seventeen-year-old Kiwi, sixteen-year-old Osceola, and twelve-year-old Ava.

To make matters worse, a rival theme park has opened on the mainland. The World of Darkness, which feels straight out of George Saunders’ CivilWarLand in Bad Decline, is a biblically themed park featuring pools of water dyed to look like blood, and an epic water slide through the inside of a whale.

Kiwi, the precocious genius of the family, sets off for the mainland to make money to save Swamplandia! and the hope of getting himself enrolled in a regular school (up to this point he had been homeschooled with his sisters). Shortly after Kiwi runs away, the Chief too sets out for the mainland with the vague mention of business meetings and getting investors for a new attraction on Swamplandia!, Carnival Darwinism.

This leaves Ava alone in the swamp with the gators they call Seths, and her sister Osceola who has steady stream of ghostly boyfriends. After discovering an old copy of a book called The Spiritist’s Telegraph and playing around with a Oujia board, Osceola spends more and more time with her dead boyfriend, a Depression-era teen dredgeman and eventually runs away to elope with him.

This sets Ava out on her quest with a mysterious Bird Man to rescue her sister. Danger ensues. This feels a little glib. The way Russell crafts Ava and the Bird Man’s trip is so masterful that like Ava, you don’t realize things are about to go horribly wrong until it’s much too late. I had an actual physical reaction reading some of these passages. I’d be reading and realize my heart was beating faster or I was holding my breath. At alternating times I was afraid for Ava, the Bird Man, hell, even myself. It was spellbinding.

But often the spell was broken by Kiwi. The novel is told in alternating chapters by Kiwi and Ava. From Kiwi we get the wonderful absurdity of The World of Darkness and the difficulty he has adjusting to life away from the swamp. Pop culture, slang, and even the way teenage boys interact with each other is foreign to Kiwi and the way he clumsily navigates this new world brings a lot of humor to a book that is at times quite scary.

At times I greeted these chapters as welcome diversions and other times I felt like it was distracting me from the real story. As much as I enjoyed Kiwi I always wanted to get back to Ava. She’s the one who really carries the story about this damaged family and makes you hope they can somehow safely find their way back to each other.

I loved reading Swamplandia!. It infected me in the best way, becoming a temporary obsession that had me composing odes set to the tune of The Decemberists’ “O Valencia!” when I wasn’t reading it.