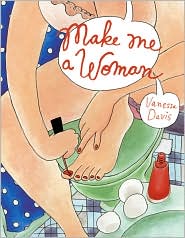 There is this moment in Although of Course You End Up Becoming Yourself, the five-day conversation between David Foster Wallace and David Lipsky, where DFW tells the latter that he can’t wait to read his novel Art Fair so he can see the way his brain works.

I’ve been unable to get that out of my head since I read it, and now through everything I read I’m conscious of being inside the writer’s head. This is especially a treat in Vanessa Davis’s collection of comics Make Me a Woman, an autobiographical trip through six years and three states.

Davis turns the pencil on her life: her friends, her family, herself. Snippets of conversation and the highlights of a New Year’s Eve party or a trip to Florida. The whole thing is a very charming and very real lookee-loo including moments spent bent over a sketch pad with her friend Gabrielle (I’m assuming Gabrielle Bell) or sleeping next to her boyfriend, Trevor. (I’m assuming Trevor Alixopulos). There is this kind of quiet existence where a bike ride is the muse. And those blood boiling arguments with her sister, her mother’s conversational ticks, and her consciousness that paranoia drove one boyfriend away, so she must reign it in before another follows suit.

She captures the minutia of a day with journal sketches about a bitchy girl who stops by the window at the college where Davis works as an administrative assistant, then running into the woman again at a coffee shop, or drinking too much sangria. The hilarity of purchasing toilet paper and a Hershey Bar in the same trip to a convenience store. Getting her bangs trimmed by a friend in New York. Judging her own life based upon episodes of “The Gilmore Girls.” The weird, fascinating and gross-ness of getting her wisdom teeth removed. There are also stories about how her Jewish upbringing presents itself in her daily life. She also doubles back to memories: Begging her parents to go to fat camp and loving every minute of it. The grade school bestie she spent every second with. Every twenty or so pages, Davis busts out a full-page, full-color portraits of women, these beautiful, colorful women. Happy and wearing kicky outfits.

Davis has a no-boundary approach to her drawings, where the illustrations bleed into each other and the story has an S curve to it that plenty of times ends in dancing. This collection includes fine-tuned bits, colored and honed, as well as what are seemingly? the kind of rough drafts you would see scribbled onto a napkin or phone book. Half-finished figures, eraser marks, just the briefest suggestion of people and objects in the background. This could have gone this way: Why not firm up your presentation, Davis. This is, afterall, a $24 hardcover collection. Rather, it makes the whole thing more endearing. A peek behind the curtain. Seeing the compulsion to create, even when that creating isn’t a multiple page, multiple color spread about spending Mother’s Day weekend in West Palm Beach. These half-doodles are truly that quick look into a friend’s journal when she is in the bathroom. Found art wind blown down a sidewalk.