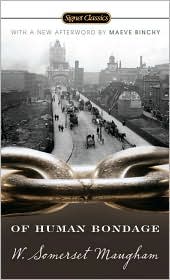 The 1934 movie version of Of Human Bondage lops off the first 300 pages — easily my favorite parts — of W. Somerset Maugham’s novel. It skips the newly-orphaned preteen Philip Carey with club foot going to live with his uncle, the vicar; It ignores playground rivalries for the affection of a charismatic male classmate; It omits the season Phillip spends wooing an older lady for sport, his failure as an accountant and all but the finals scenes of a life-course altering moment from his time spent in Paris as an art student.

It’s like: Opening credits — bam! — med school. Bam! Google-eyed over the trashy, ho-hum, easily distracted Mildred, played by Bette Davis with a bad case of the yips. Bam! In the interest of creating an easily digestible 1 hour, 22 minute narrative, you lose poor Philip’s surly teen years which include a self-consciousness about his limp that manifests as an inability to socialize. His low self worth that eventually leads him to this woman he gets bat shit crazy about, who only deigns to play kissy-face with him when she’s in a dire financial situation.

To me this says: Everything you need to know about Of Human Bondage is that it involves a limping med student on the verge of financial ruin and mistreatment at the hands of a former waitress who parlays his coos into new dresses, a place to stash her bambino, and nights on the town.

Which made me think of the way other classic novels could be boiled down to a gist. Because really, when it comes to classic novels, you only need to really know the gist, if that. I mean, does anyone really even go to dinner parties anymore?

(This is actually kind of a fun game to play).

So, anyway, Of Human Bondage is about an orphan with club foot who drops out of school, tries his hand as an accountant (badly), decides to become an artist (mediocre), then moves on to med school (off and on) all while the wrong women get nutso futso for him and the one he wants hangs around until her wardrobe is updated and she’s been distracted by some new eye candy. He tries to shake her from his craw. Every once in a while things go his way. It’s also about shedding organized religion and the powerful hold money has on a person. It’s about love and like-but-not-love and it’s about the changing topography of a person’s social circle.

This is one of those life stories of a character, a sort of verbal time lapse photography. Philip’s route from Point A to Point B remains understandable nearly 100 years after it was written. (Although there is some coyness with language, obviously, that reflects the period). The characters are likable — except the primary ones, but some of those primary ones change for the better. It’s not a bad way to spend time reading. And it’s definitely better than spending the time to watch it.