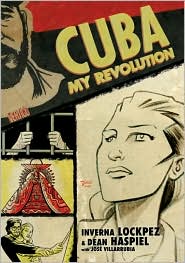 When David Lee Roth (the “Diamond” is implied) left Van Halen I obviously blamed Dave. OBVIOUSLY we were dealing with a platinum-haired prima donna suffering from the ever so infectious Lead Singers Disease (LSD) that caused all lead singers to someday leave the band that made them famous to start their own band, where they could throw off the shackles that were causing “creative differences.” Right? RIGHT?

But then Sammy Hagar came and went. Then Gary Cherone. Then Sammy again for a little bit. . . and then the dark thoughts came. Thoughts like, “You know, maybe my guitar playing idol, Eddie Van Halen, is actually the dick.” Dark days my friends, dark days.

Youthful idealism. Something to which we can all probably relate. For me, it was the great and powerful Edward Van Halen. In the graphic novel Cuba: My Revolution by Inverna Lockpez and Dean Haspiel, it was Fidel Castro.

Inverna Lockpez has written an excellent story inspired by her experiences coming of age in Cuba of the 1950s and 60s. She does not place herself as the main character, but instead uses “Sonya” in her place. Sonya is a supporter of Fidel Castro’s army of revolutionaries in their attempt to topple the US-backed dictator Fulgencio Batista. She is eager to see Batista’s corrupt government crumble at the hands of the charming and handsome Castro. She is so infatuated by the ideal society described by Castro that she dismisses her dream of becoming an artist in favor of becoming a surgeon for the betterment of Cuba.

She turns a blind eye to every criticism levied against the new regime. Even when a horrible misunderstanding occurs that lands her in a Cuban prison interrogated by the KGB that scars her emotionally for years to come, she dismisses it as a simple mistake. She stays in Cuba despite the exodus of many of her family and friends who can see the things she refuses to notice. She begins to take up her pencil and brush once again and only then does she begin to notice the error of the government’s ways.

Just as Sonya’s art helps her begin to see the truth, Dean Haspiel’s art makes us all see the truth. You may remember Dean’s work from 2008’s The Alcoholic. He is an excellent cartoonist who does a fine job on this graphic novel. Haspiel uses black and white panels accented by reds and pinks (done by colorist Jose Villarruba) for punctuation and to bring the reader’s attention to certain important details.

Cuba: My Revolution does a fantastic job as a story and history lesson. I really enjoyed it and finished it in one sitting. And as all great books about the Cuban Revolution should, it reminded me of the faults of Van Halen as a whole and not just David Lee Roth.