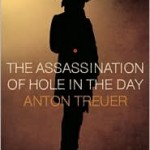 Dr. Anton Treuer is Professor of Ojibwe at Bemidji State University. He has a B.A. from Princeton University, M.A. and Ph.D. from the University of Minnesota. He is Editor of the Oshkaabewis Native Journal, (pronounced o-shkaah-bay-wis) the only academic journal of the Ojibwe language.

He is also the author of seven books, including The Assassination of Hole in the Day which has been nominated for a MN Book Award in the General Non-Fiction category.

What book(s) are you currently reading?
I am reading X-Marks by Scott Lyons right now, and it is a great contribution to the field and fun as well.

Have you ever had a crush on a fictional character? Who?
I was madly in love with the Elf Queen in the Tolkein seres in 7th Grade. Think I still have a chance?

If your favorite author came to Minnesota, who would it be and what bar would you take him/her to?
I would take J.K. Rowling to Brigid’s Cross in Bemidji. It’s a lot like The Leaky Cauldron, with an up north twist.

What was your first favorite book?
I read all 25 books in the Tarzan Series twice and Tarzan and the Foreign Legion three times in Middle School. I have been hooked on all forms of literature ever since.

Let’s say Fahrenheit 451 comes to life, which book would you become in order to save it from annihilation?
Plato’s Republic. So much of the best parts of our modern world start with the ideas of the Ancient Greeks.

What is one book you haven’t read but want to read before you die?
That would be my future masterpiece. But a man has to guard his mysteries until the time is right.