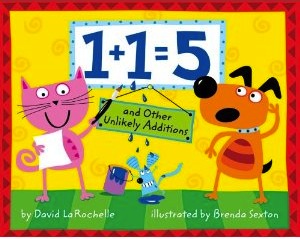 Okay, before I tell you about David LaRochelle, you should go take a look at his pumpkin carving pictures. Why? Because besides being an author and illustrator, he’s also a professional pumpkin carver. The pictures are pretty rad.

David is the author of many children’s books, including the MN Book Award Nominee in Children’s Literature 1+1=5 and Other Unlikely Additions (illustrated by Brenda Sexton). He also wrote the young-adult novel Absolutely Positively Not (which our reviewer LeAnn absolutely positively adored).

What book(s) are you currently reading?
I just stopped by the library and picked up Guys Read: Funny Business, edited by Jon Scieszka. It’s a collection of humorous stories for young people. I’m also in the middle of Three Cups of Tea by Greg Mortenson, but I’ve been working on that for about three years, so maybe it doesn’t count.

Have you ever had a crush on a fictional character? Who?
Robin Hood. In fact, I still have a crush on him. I used to fantasize that Robin Hood would magically appear in present time and I would be his helpful guide, showing him how to navigate the modern world. Then we’d both be transported back to Sherwood Forest where he would make me his extra special Merry Man.

If your favorite author came to Minnesota, who would it be and what bar would you take him/her to?
One of my favorite authors, Lisa Yee (who writes hilarious stories for kids and teenagers) is coming to Minnesota. I hope to take Lisa to Lee’s Liquor Lounge in Minneapolis where I go country line dancing every Sunday evening.

[Editor’s Note: Author Lisa Yee will be at the Minneapolis American Girl in the Mall of America tomorrow, February 13 at 4:30 p.m.]

What was your first favorite book?
Half Magic by Edward Eager and The Lion, the Witch and the Wardrobe by C.S. Lewis (I had a special notebook where I wrote secret letters to Aslan). I was heartbroken when I reached the end of both of these series.

Let’s say Fahrenheit 451 comes to life, which book would you become in order to save it from annihilation?
I have to steal Lynne Jonell’s answer to this question; I’ve never read Fahrenheit 451 and I didn’t know that’s what happened. Dear Mr. Henshaw, by Beverly Cleary, is a book that definitely deserves to be saved.

What is one book you haven’t read but want to read before you die?
Great Expectations by Charles Dickens. I started reading it the summer I worked outside as a security guard at the Renaissance Festival, but it was too hot and I didn’t get very far. I think Dickens was meant for winter.